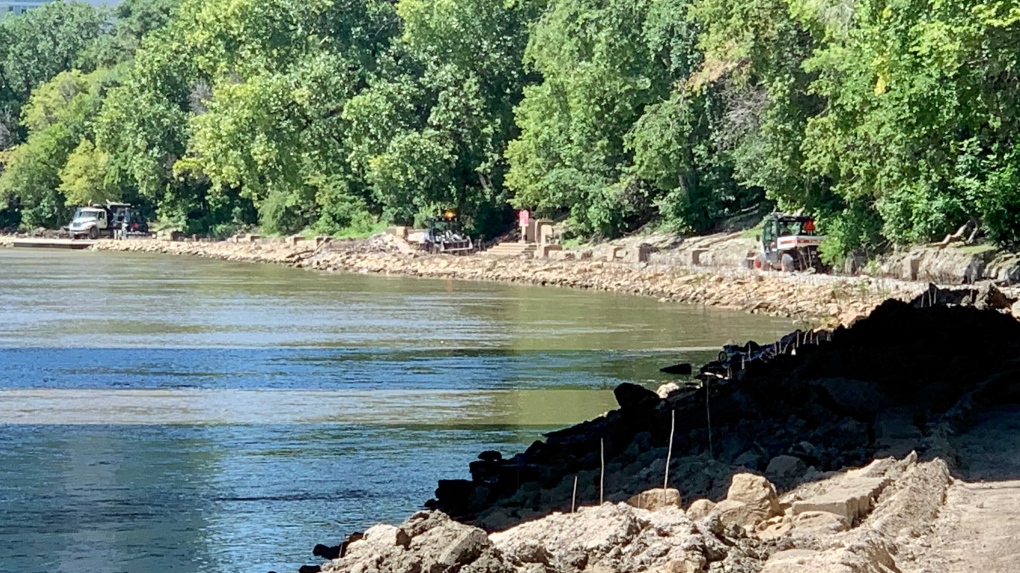 The Red River is back to a normal height and the River Trail is open, but that doesn't mean it's easily walkable.

The city said crews continue to work on cleaning up the trail throughout the city as debris was left behind once the river receded, including the stretch from The Forks to the Legislative Building.

"This location saw water levels rise significantly when crews were mostly through their first round of seasonal cleaning; now that it has receded crews are once again cleaning and expect to finish adding new material to the trail to freshen it up in the coming days," a spokesperson for the city said.

The spokesperson said it's not uncommon to have to clean the walkway several times a year as the water rises and recedes, but they noted this year the trail was under water for a significant amount of time which led to more debris.

They also added that part of the trail will be closed for the remainder of the year because of damage in the winter.

"The ice this past winter caused some additional damages to the trail and related features, especially to the structure under the rail bridge; this portion of the path will remain closed until a permanent solution is built."

Prime Minister Justin Trudeau says he will be visiting the regions in Atlantic Canada impacted by Fiona 'as soon as possible this week.' And, as MPs head back into the House of Commons for the first time after this weekend's storm, the NDP are requesting an emergency debate to discuss 'the urgent and escalating situation in Atlantic Canada.'

Hurricane Ian moved near the Cayman Islands and closer to western Cuba early Monday on a track to hit the west coast of Florida as a major hurricane this week.

Lights out, ovens off: Europe preps for winter energy crisis

As Europe heads into winter in the throes of an energy crisis, offices are getting chillier. Statues and historic buildings are going dark. Bakers who can't afford to heat their ovens are talking about giving up, while fruit and vegetable growers face letting greenhouses stand idle.

A young man shot a Russian military officer at close range at an enlistment office Monday, in an unusually bold attack reflecting resistance to the Russian leadership's efforts to mobilize hundreds of thousands of men to wage war on Ukraine.