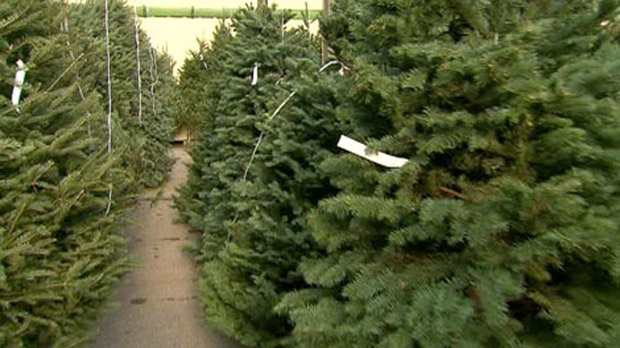 A holiday tradition going back generations may be in jeopardy for some as drought conditions has wreaked havoc on some local Christmas tree producers.

Three years of missed spring rains and a summer drought has adversely affected tree growth and impacted the number of available trees for Country Pines based out of Tyndall, Man.

“I should have at least about a foot to a foot and half of growth on my trees and if I’m getting six inches that’s all I’m getting out of them because of the moisture in the ground,” said Michael Kisiloski, chief operator for Country Pines.

The result is a crop one third the size of normal year and their backup order of pre-cut trees has yet to arrive.

“This year it’s going to be astronomical. I don’t even know if I can even open up my doors if I don’t get that supply of trees coming in cause right now there’s going to be a lineup about a mile long according to all the emails and phone calls I’ve been getting,” Kisiloski said.

Country Pines is not alone. In a social media post Kowalke Tree Farm, also in the area, said it won’t be opening this year.

“The drought this summer hit our crop of trees quite hard, and we don't have enough trees available to make it feasible for people to make the trip,” reads the post.

However, hope for a locally grown tree is not lost. South of Steinbach lies CD Trees and their situation is more promising.

Cliff Freund and his wife planted their first trees back in 1990 and started selling them in 1996. They also import some trees that don’t grow well in the province, like Balsam and Fraser firs, to supplement their supply.

They mainly produce Scotch Pine and White Spruce trees on their 30-40-acre property. Freund said once the young trees are about a foot or two tall they are pretty hardy.

He said the trees might suffer a little in growth because of the dry weather but it’s not really a big deal.

“The pine they usually grow more than they need to, because to get them to grow full we cut them back,” said Freund. “Some years we have to cut back a foot and a half and this year a foot or maybe six inches.”

The spruce, being a slower grower, might be set back a year.

The potential shortage of trees will be felt more by wholesalers and tree farms that rely more heavily on imports, according to Freund.

A frost in the northern U.S. producing area killed new growth and limited tree supply, leading some suppliers to limit sales to amounts from previous years and certain types of trees were not available at all.

Kisiloski said the demand on local tree farms has been growing while the number of local producers has dwindled over the years going from 15 in the area to five.

Country Pines has about 7,000 trees in various stages of growth, but the recent mortality rate of its seedlings has been high due to the weather.

To survive, Kisiloski said he’s going to have to change his approach and start hiring staff to water the trees on his property when previously it was left to Mother Nature.

“I can’t afford to lose the amount of seedlings out there cause I won’t have a farm left anymore,” Kisiloski said. “It takes ten years to grow a tree right, and if I get two years of good moisture the tree itself establishes itself and will take off,” said Kisiloski.

Both producers open their doors to the public this Saturday.

Warnings have now been issued ahead of a significant blast of winter weather that could dump up to 40 centimetres of snow in parts of southern Ontario.

Djokovic arrives in Dubai after deportation from Australia

Novak Djokovic arrived early Monday in Dubai after his deportation from Australia over its required COVID-19 vaccination ended the No. 1-ranked men's tennis player's hopes of defending his Australian Open title.

The Trans Mountain pipeline returned to normal operating pressure on Saturday, it said in a statement, after functioning at reduced pressure for over a month.

Omicron's spread is affecting even the youngest members of families, as scientists urge vaccination

Omicron’s spread has been so extensive that there are few families that haven’t been touched by it at all -- and for some families, that means worrying about their children.

Remains of four people found at site of Ottawa explosion, but dangers in area hampering recovery