Winnipeg Fire Paramedic Service crews were called to battle a 'significant fire' in a warehouse at 274 Jarvis Avenue Monday.

Fire crews and police responded to an automatic alarm just before 12:45 a.m. and found a well-involved fire.

It spread across the building which occupies a full city block, the fire service said. Most of the building had collapsed. 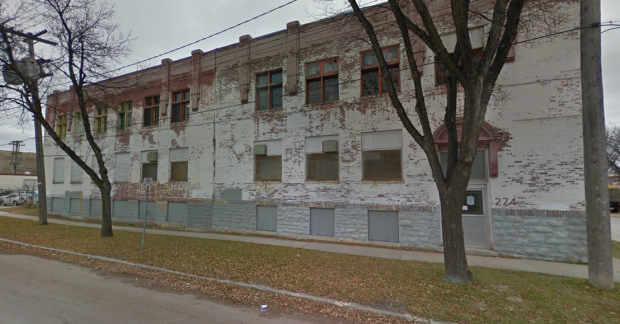 The warehouse on Jarvis Avenue before it was consumed with fire Monday. Google Maps photo.

The City of Winnipeg tweeted just before 4 a.m. that the area had been evacuated and residents got out safe.

Crews are at the scene of a significant fire in a warehouse at 274 Jarvis Avenue. Residents in the area have been successfully evacuated and we are asking the public to avoid the area. #Winnipeg pic.twitter.com/43Ir3ZbbYN

The fire service said eight nearby homes were evacuated and Winnipeg Transit provided a bus to shelter the evacuees. Most have returned home, with the exception of one family. Manitoba Hydro cut power to the surrounding area to make sure hydro lines, power, and transformers don’t add to the hazards.

“We’ve cut the power along the lines here on the north side because what’s left of the building behind me is in danger of imminent collapse and could well take down the hydro lines as well,” Winnipeg Fire Paramedic Service chief John Lane said.

The city also tweeted that smoke from the fire is travelling east across the city and people are being asked to close their windows.

At one point, crews were dispatched to fight a fire on the roof of another building caused by a flaming ember.

“One of them (flaming embers) landed on roof of a building to the east of this building, but we noticed it and attacked it right away and were able to extinguish the fire with minimal damage to the roof.”

WFPS said one firefighter suffered a slip and fall injury, but was able to continue working.

Multiple crews are involved in battling the fire, including an aerial truck. Paramedics are also on scene as well as Manitoba Hydro. pic.twitter.com/Cbai2b5H7P

Debbie Clarke, the emergency disaster services director for Manitoba and northwest Ontario was there.

“We’ve done a lot of coffees, hot chocolate, and snacks, just giving everybody some hydration, some bottles of water. A few snacks to keep up the energy and I gave out a couple of blankets to a couple of the evacuees,” she said. 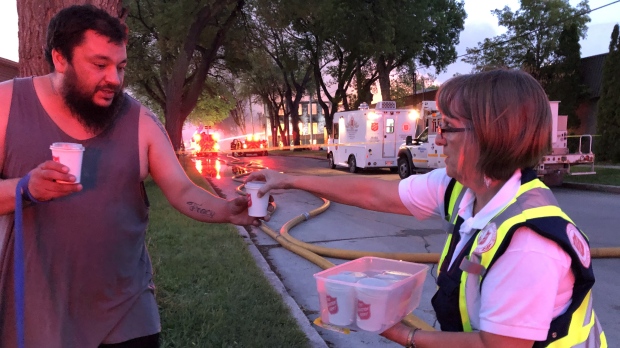 People from Salvation Army were seen passing out coffee to people in the area. CTV photo/Alex Brown

The cause of the fire is under investigation and no damage estimates are available at this time.

Lane said fire crews will likely be on scene for 48 more hours to tear down the rest of the building and extinguish hot spots.