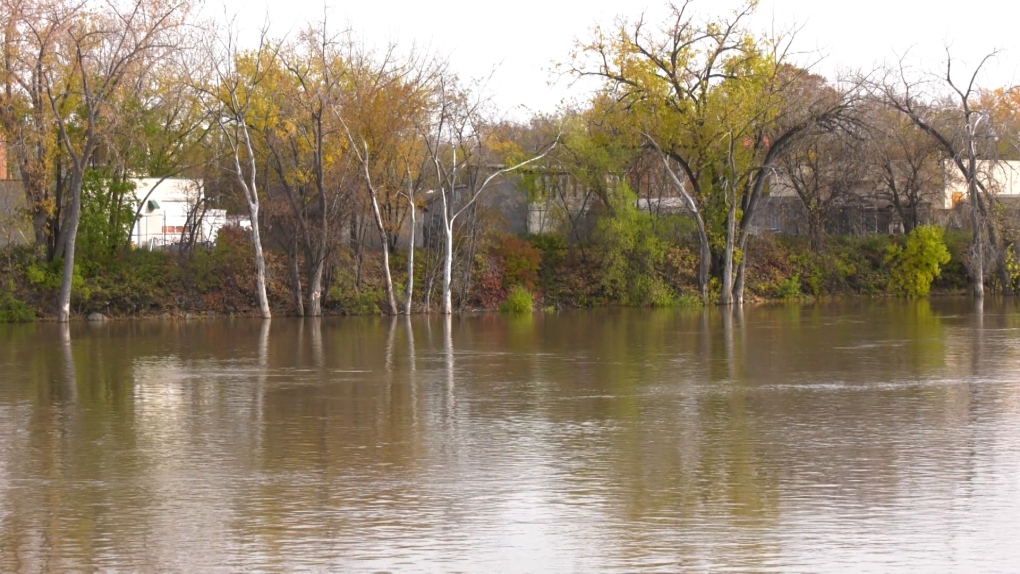 WINNIPEG -- The province said although flood warnings and high water advisories remain in several places in Manitoba and around 1,300 Manitoba Hydro customers still don’t have power, the long hangover from an unprecedented early winter storm is subsiding.

Flood warnings are in place on the Red River between Emerson and the floodway inlet control structure.

The province said the crest of the Red River between Emerson and Morris will come later than expected, between Oct. 24 and 27, thanks to rain south of the border, and that some low-lying agricultural land in the region could flood.

It said the rain won’t impact Red River levels north of Morris, and the river is near peak between Morris and the floodway.

The province noted that water is rising slowly at St. Adolphe due to the lowering of the floodway gates and said it will be weeks before the gates are fully lowered.

In Winnipeg, the Red River currently sits at 16.8 feet at James Avenue. It’s expected to peak between Wednesday and Thursday at 17 to 17.3 feet. On Monday, the city said sandbags had gone out to one property that’s at risk of flooding with levels higher than 17 feet.

A flood warning is also in place for lakes in Whiteshell Provincial Park, which are at record high levels for this time of year.

On Tuesday, water could be seen over what is usually a beach at West Hawk Lake, where waves were crashing close to a retaining wall.

Manitoba’s Hydrologic Forecast Centre says water levels are record high in Whiteshell lakes for this time of the year. However, all time record highs were set in summer 2016. This is the beach in West Hawk Lake. @ctvwinnipeg pic.twitter.com/mmQlm9LUja

The province said unless the region sees significant precipitation, it’s expected water levels on those lakes will slowly decline.

Creeks and rivers in southeast Manitoba are also under a flood warning.

A high water advisory covers portions of the Assiniboine and Souris rivers, but the province said those rivers have peaked at most locations and are expected to be able to handle the higher-than-normal flows being experienced.

Outages also continue in the R.M.s of Grahamdale, Portage la Prairie and West Interlake, where community members have shown gratitude for hydro workers by holding dinners and having children write thank you cards.

Manitoba Hydro is asking people to submit photos and videos and other information about the storm.

“Images of ice and snow accumulation leading up to and during outages to help quantify the magnitude of the event,” said the province, noting that hydro can “use the information to assess the system’s resiliency and for future planning.”