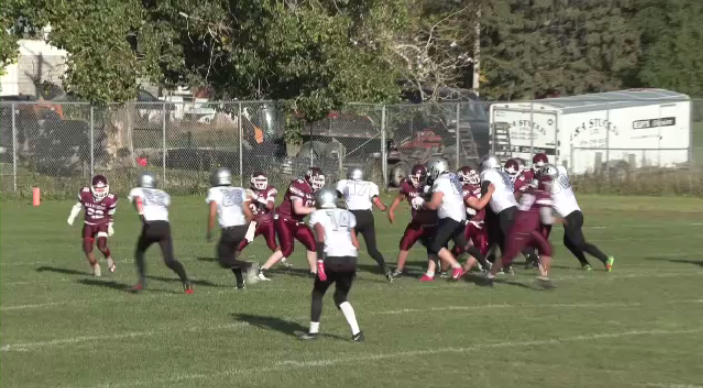 Meanwhile, the Sisler Spartans beat the Garden City Fighting Gophers 21 – 9, and it was a close game between the Elmwood Giants and Kelvin Clippers, but Kelvin came out on top, 33 - 29.

The Miles Macdonell Buckeyes beat the Crocus Plains Plainsmen by a score of 34 - 13. The Beaver Brae Broncos handily beat the River East Kodiaks 47 - 26, and it was a similar score between St. John's and Dryden, with the Dryden Eagles beating the Tigers 54 – 26.

The Fort Frances Muskies beat the West Kildonan Wolverines 49 – 6, and in the late game the St. Paul's Crusaders dominated the Oak Park Raiders 44 – 6.

'Bring them back!': Calls to bring Canadians home from Syria come from inside and outside of court

'Bring them back!' activists yell at lawyers as they walk into the Federal Court in Ottawa, where a judge will decide whether or not to order the Canadian government to repatriate more than 40 Canadians imprisoned in northeast Syria.

What is the 'white elephant' gift exchange?

With the holiday season in full swing, families and friends looking for a more unconventional way to give gifts can look no further than to the 'white elephant' gift exchange, but what is it exactly?

Donald Trump's company was convicted of tax fraud on Tuesday in a case brought by the Manhattan District Attorney, a significant repudiation of financial practices at the former president's business.

The Federal Court of appeal says it will uphold all but one of the rules that bolster compensation for air passengers subjected to delayed flights and damaged luggage.

In the 73 minutes on Tuesday afternoon that it took for Prime Minister Justin Trudeau and five other dignitaries to officially open the 15th global talks to save nature from human destruction, statistics suggest another 4,000 hectares of forest around the world was lost to that same force.