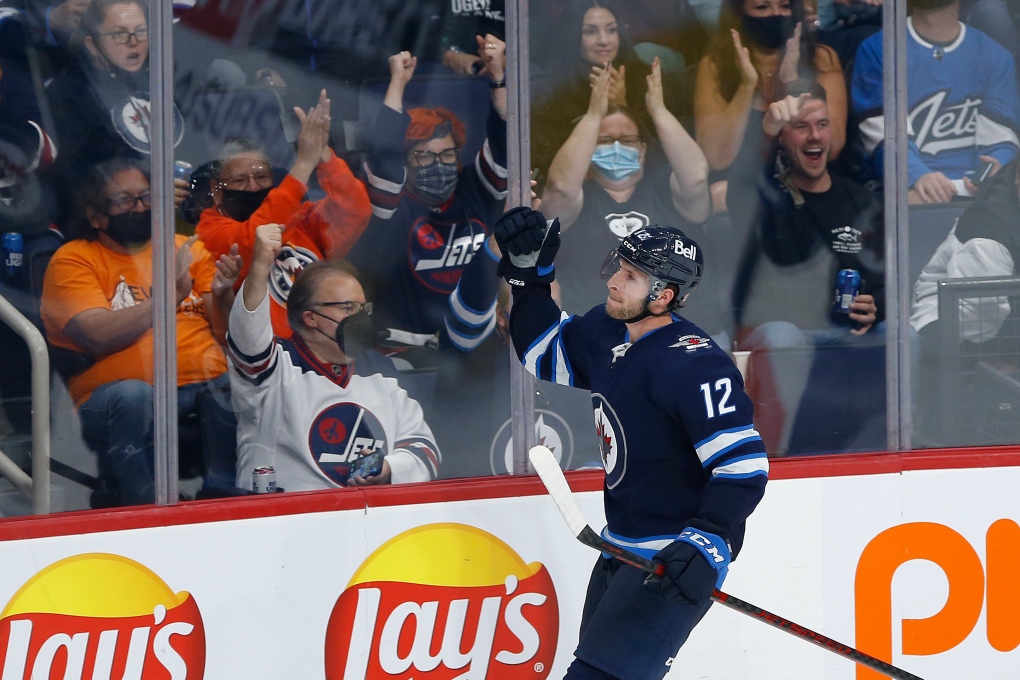 It may have been a pre-season tilt against a watered-down opponent, but forward Jansen Harkins made a case for full-time employment with the Winnipeg Jets on Wednesday night.

Harkins, who was in and out of the lineup last season, had two goals and an assist to lead Winnipeg to a 5-1 victory over the Edmonton Oilers in a game before 15,078 fully-vaccinated fans at the Canada Life Centre.

"Pretty fun, obviously," Harkins said. "Any time you come back from a summer off-season, it's fun to get back on the ice. The fans are pretty electric and scoring goals is one of the best things you can do out there. Yeah. Good night tonight."

Harkins was aware of the impression he has made thus far.

"We've got a lot of young guys fighting for spots, a lot of good players," he said. "We've generally been a pretty veteran team the last few years, so there's a couple of spots right now everyone's really chasing for. Competition is pretty good."

Evgeny Svechnikov, who played on a line with Harkins and centre Cole Perfetti, had a goal and two assists.

"I think Harks is obviously pretty fast," said Svechnikov, who set up Harkins with a nifty pass on his second goal. "Any time he has a chance in the rush, you can hit him and have a breakaway like he scored. It's been fun with that.

"And obviously Perfetti, Cole, he is very skilled and, in small areas, is very good with his hands and can create space and make plays. I think we all feel that and it's been fun."

"They've been pretty good," he said. "They got a chance to play together a little bit. Some good things with the puck. I think they worked real hard at their game.

"For those guys, exhibition means a lot. Those are big games for those three guys. They've got something to show, something to prove. And they worked with each other on the bench, that's part of it, too. They were quick, made plays, showed some confidence. It was good."

Austin Poganski and Kyle Connor rounded out the scoring for Winnipeg.

In two periods, Edmonton netminder Ilya Konovalov made 17 saves on 21 shots before giving way to Stuart Skinner in the third. Skinner then made six saves.

I know we lost pretty big but I thought both of our goaltenders were fine tonight," said Oilers coach Dave Tippett. "We didn't protect them very well. ΓÇª There was one good deflection (by Svechnikov) and the other one (Poganski's) bounced off a guy's head or something.

"It was one of those nights. We didn't create very much, we didn't make very good plays and that's what we're looking at. We're looking for players that under pressure can make plays under pressure, how they react under certain situations and some goes up and some guys go down and that's just where we are in training camp."