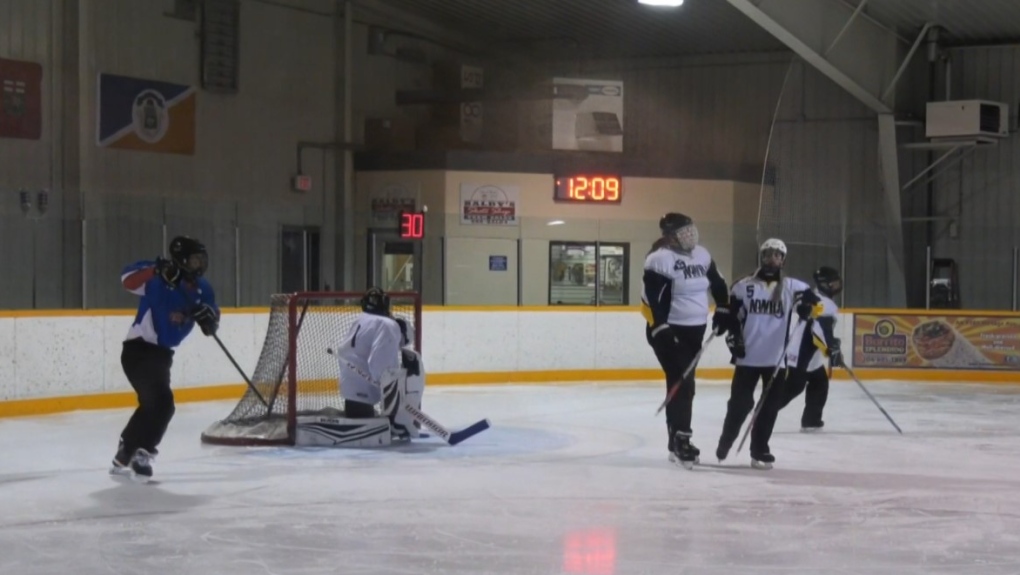 Teams in the Winnipeg Ringette League play a game on Nov. 13, 2021. At the beginning of the season, the league mandated all players had to be doubled vaccinated. (Source: Mason DePatie/ CTV News Winnipeg)

Last month the province announced that as of 12:01am on Dec. 6, Manitoba youth age 12 to 17 will be required to show proof of at least one vaccination or provide a recent negative COVID-19 test to take part in indoor recreational sports.

The province said negative tests need to come from participating pharmacies, not from publically run testing sites, and unvaccinated youth will need get the test within 72 hours of participating.

The province said the new rules were prompted by modelling, which shows case counts are increasing most rapidly among youth between ages 0 and 19.

Hockey is one of the predominant sports played through Manitoba’s winter months, and Hockey Manitoba executive director Peter Woods said with case numbers continuing to rise, the health order was expected.

“Maybe sports was living a little bit on borrowed time, and it could’ve been probably introduced earlier in the year like they’ve done with a number of different activities,” Woods said.

Woods said the facilities that are holding the games will be responsible for checking for proof of vaccination, but there are still some questions around what a negative test looks like, if tests will look different from region to region, and what kind of identification can be provided.

“They’ve identified some of the things you can provide like a health card, a web view, or other government documentation, but a lot of 12 year olds and up might not have that information,” he said.

Woods said there are still some challenges that need to be worked out, and they’ve been getting a lot of questions from members in the last month leading up to the new rules being implemented.

Some sports leagues took it upon themselves to implement mandatory vaccination for youth age 12 to 17 right from the start.

CTV News Winnipeg spoke with the vice president of the Winnipeg Ringette League Jennifer Kingsley in November. She said the league required players to be vaccinated at the beginning of the season, months before the province’s requirements.

“We are willing to stand there and say the health of everyone is more important than a little bit of problems for us to (implement) it,” said Kingsley.

Woods said the new rules are another step towards keeping everyone safe.

“Every time that virus has an opportunity to spread it can mutate, and if it mutates it might get to the situation where the current vaccinations that we have will no longer protect us, and we’ll have to start over at square one again…that’s one of the biggest reasons why people should look into it,” Woods said.

Hockey Manitoba has frequent updates surrounding health mandates in the return to play section of its website.

'I need to be with my family': Afghan refugee pleads for help reuniting with loved ones

A young Afghan woman who escaped to Canada last summer is desperately worried for her family members who did not make it out of the country and are now living in hiding.

This Saturday, Canada will mark the 30th anniversary of Dr. Roberta Bondar's groundbreaking journey to space, when she became the first Canadian woman and neurologist to do so.

Inflation: These items saw the largest price increases in Canada

On Wednesday, Statistics Canada reported that the annual pace of inflation climbed in December at a rate that hasn't been seen in 30 years. CTVNews.ca looked at the consumer items that saw the largest year-over-year increases in prices.

Ontario will allow restaurants to reopen at 50 per cent capacity on Jan. 31 as part of the province's plan to lift restrictions over the next few weeks, sources say.

When could the COVID-19 pandemic switch to endemic?

An infectious diseases specialist says the COVID-19 pandemic could begin pivoting to an endemic status in higher-income countries by early spring, based on how Omicron is spreading and affecting hospitalization rates.

Canadian trial: Remdesivir reduces need for ventilation by half for COVID-19 patients

A Canadian study suggests the antiviral medication remdesivir could have a 'modest but significant effect' on COVID-19 patient outcomes, including decreasing the need for mechanical ventilation by approximately 50 per cent.