'Heartbreaking': Ottawa to help farmers and ranchers affected by drought 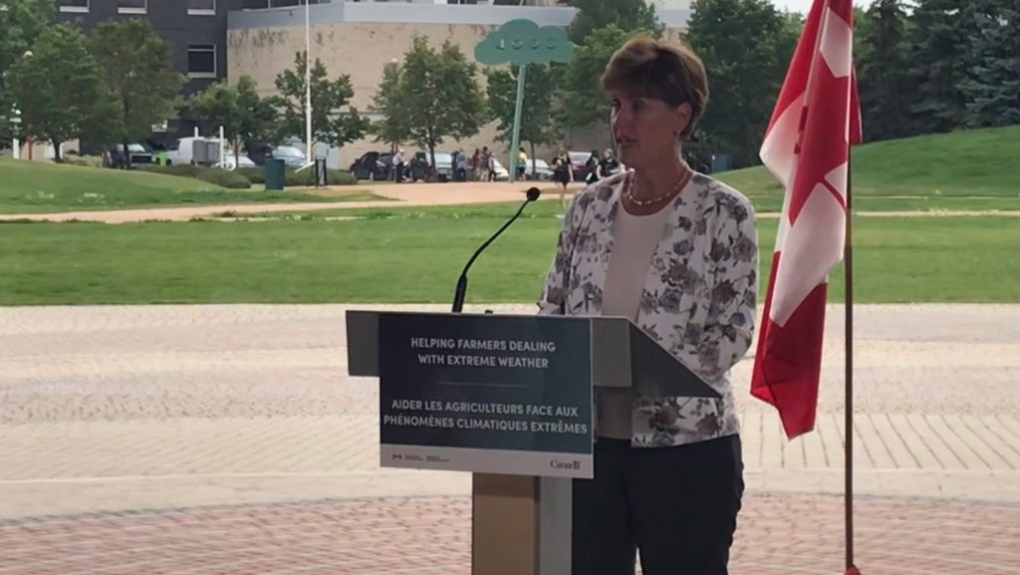 Help is on the way for Canadian farmers and ranchers severely affected by this year's drought.

Bibeau said Ottawa is working closely with the provinces to quickly respond to drought in Western Canada.

"I wanted to come to Manitoba to talk to you in person and to see with my own eyes the devastating effects that extreme heat and insect damage are having on your farms," Bibeau said.

"I can't begin to imagine the stress that producers are going through. Watching your pastures and crops dry up, wondering how you're going to get your animals through the winter, and facing the prospect of sending cattle off to auction, animals that are the result of generations of careful genetic selection, hard work and sacrifice."

Scorching temperatures and little to no rainfall have left crops in poor condition across wide swaths of Alberta, Saskatchewan and Manitoba.

Manitoba has been hit by months of dry weather that has left soil moisture and river levels in many areas to near-record lows. Most water basins in southern and central areas have received 200 to 250 millimetres less precipitation than normal.

In some parts of the country, grasshoppers have infested fields. Several municipalities have declared states of agricultural disaster and ranchers say they are running out of hay to feed their cattle.

Drought is causing problems in western Ontario and in British Columbia, where active wildfires are having significant effects on producers.

The measures announced by Bibeau include early designation of a livestock tax deferral provision for affected regions in all of Western Canada and Ontario. That will allow beef producers who are forced to sell a large amount of their breeding herd to offset the resulting revenue with the cost to replace the herd.

Bibeau also outlined adjustments to the AgriInsurance program to make drought-damaged crops on the Prairies available for feed.

AgriInsurance is a federal-provincial-producer cost-shared program that stabilizes income by minimizing the economic effects of production losses caused by severe but uncontrollable natural hazards such as drought.

"These measures will increase the amount of crops available for livestock producers to help alleviate the dire shortage of feed," Bibeau said.

Tyler Fulton, president of the Manitoba Beef Producers, said time is running out for many producers who, along with their families, are a key part of the rural community.

"All of this is at risk. Because of the drought challenges, some producers are making the very difficult decision to disperse part or all of their herds. It's a heavy toll on their mental health," said Fulton.

"One family who we heard from at the office this week had to disperse their whole herd. They said can you imagine how it feels to see years of hard work and love for farming go onto a truck. This is our livelihood. It's heartbreaking."

The minister said Ottawa has also approved Manitoba's proposal to expedite any payments under a hay disaster benefit and that a request had been made by five provinces to put together an agri-recovery disaster relief program.

She said federal and provincial officials are working together to assess and design those programs province by province.

An official with the Manitoba farm organization Keystone Agricultural Producers said it's been a significant challenge for everyone this year.

"Livestock, grain and forage producers will need to make difficult choices for their operations in the coming days and weeks," said Craig Riese.

"While crop producers have seen stunted crop growth, issues with germination, problems with grasshoppers ... livestock producers have struggled to secure feed and water for their animals."

This report by The Canadian Press was first published July 22, 2021.

By Bill Graveland in Calgary. With files from Steve Lambert in Winnipeg