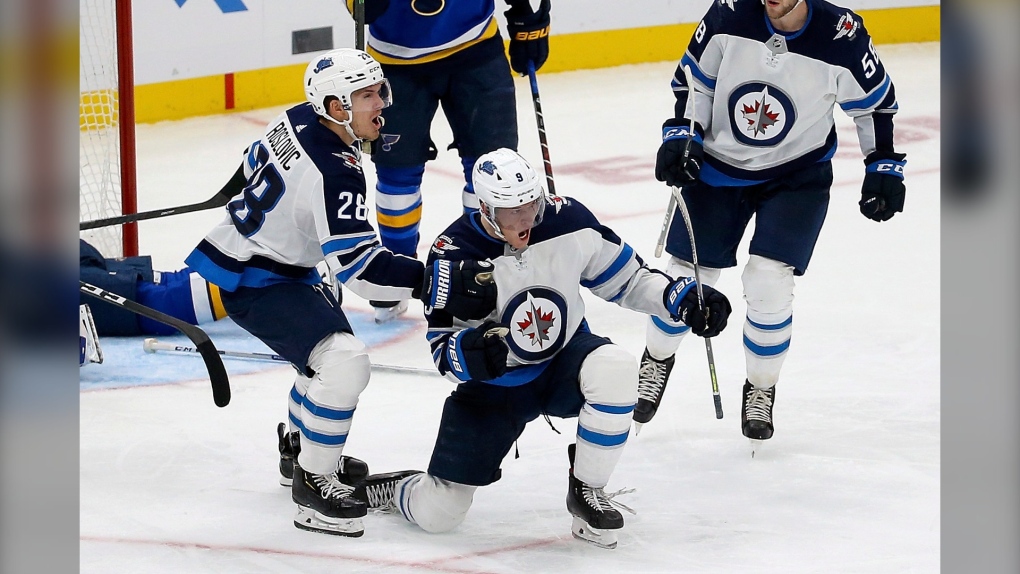 ST. LOUIS -- Connor Hellebuyck wasn't in the mood to celebrate just yet.

"It's nice and I feel great about my game," Hellebuyck said. "But, we've got to keep climbing to get that playoff spot."

Andrew Copp broke a third period tie to give the Jets the win in their lone road contest during a current 11-game stretch.

Patrik Laine, Jansen Harkins and Nikolaj Ehlers also scored for Winnipeg, which moved to within 13 points of the first-place Blues in the Central Division.

Colton Parayko and Carl Gunnarsson scored for St. Louis, which had recorded a point in its previous 11 home games. Jordan Binnington stopped 21 shots for the Western Conference leaders.

Hellebuyck stopped 38 of 40 shots in a 5-2 win over St. Louis on Saturday in Winnipeg.

He was equally impressive in the rematch and improved to 23-16-5.

Explained Winnipeg defenceman Nathan Beaulieu: "He's obviously been playing really great. You get 30, 40 shots and he's turning them away, no problem."

St. Louis coach Craig Berube has seen enough of Hellebuyck for the time being.

Hellebuyck has stopped 73 of 77 shots in the two games against St., Louis.

Copp pounced on the rebound of a shot by Harkins to break a 2-2 tie with 10:56 left in the third period. He also had the winning tally in Saturday's victor over St. Louis.

"You look at the standings, this is a very good team we're trying to catch," Copp said. "It's just so log-jammed where we're at that ever point matters. I think we're playing pretty good hockey right now."

"The initial thought is, `Control your rebound,"' Binnington said. "I've got to be there."

Laine scored his 20th of the season off a cross-ice pass from Mark Scheifele at 5:58 of the second period for a 2-0 lead. Laine has scored at least 20 goals in each of his first four seasons.

St. Louis scored twice in a span of a 2:20 in the second period. Gunnarsson blasted a shot from just inside the blue line past Hellebuyck to tie it.