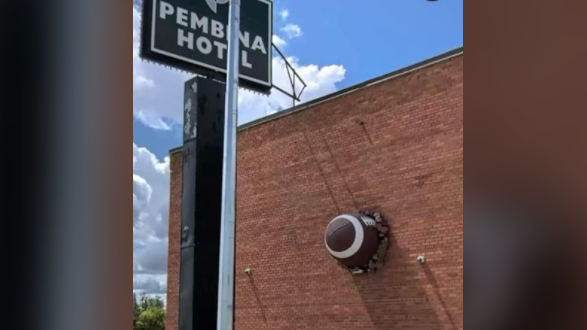 The football sign attached to the side of the Pembina Hotel. (Source: Tom Scerbo/Facebook)
WINNIPEG -

The iconic football sign that used to be attached to the Pembina Hotel has been taken down, but will soon find a new home at another Winnipeg businesses.

The hotel – known to many in the community as The Pemby – is facing the possibility of being demolished as a development firm has put a proposal in to create a 12-storey mixed-use building on the corner of Pembina Highway and Jubilee Avenue.

The sign – which shows a massive football crashing through the hotel's wall – now belongs to Chuck Lewis, the owner of Expert Electric.

"I was actually pretty excited to get it. It's a fantastic piece," said Lewis. "It's been around Winnipeg for like the last 15 years."

Lewis said now that he owns the sign, Winnipeggers will be able to see it when they drive by his business at 2177 Portage Ave.

"I'm hoping to have it up by the time the Grey Cup rolls around," he said. "It needs to get refurbished, repainted and jazzed up a little bit."

He added it was important to buy the piece as so many Winnipeggers have a memory of the sign.

"It's one of those ones that you're driving and you always remember the football going through the building."

Other than being refurbished, Lewis said he doesn't plan on making any changes to it, noting it is great all by itself.

When the football is finally added, Lewis said the words "Get in the game" will be put as a header above the sign.