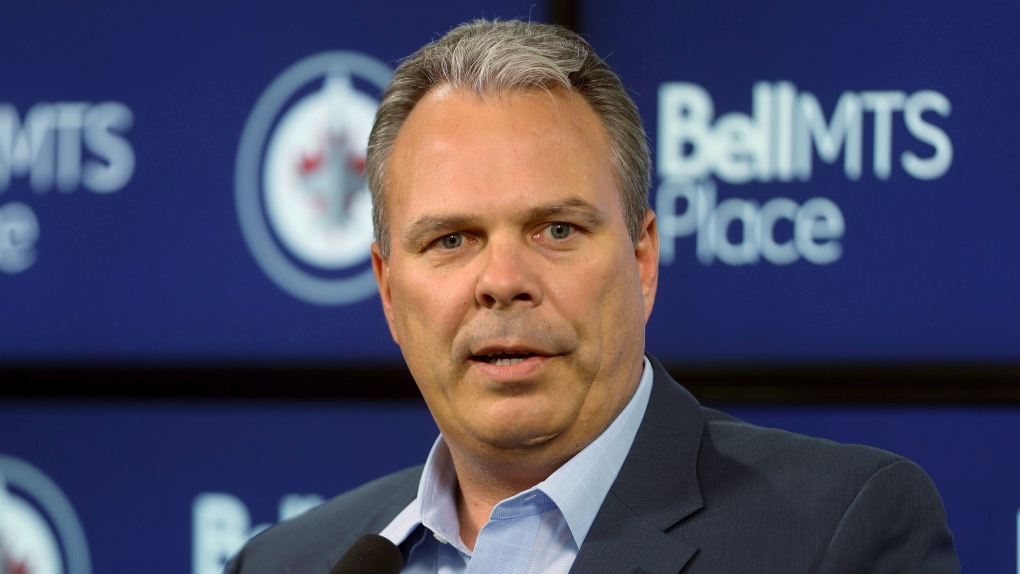 Winnipeg Jets general manager Kevin Cheveldayoff says he was "not aware" until this year of the severity of the sexual assault allegations made more than a decade ago against a former Chicago Blackhawks assistant coach.

A third-party investigation by an independent law firm found Cheveldayoff was among a group of team leaders who discussed allegations by prospect Kyle Beach against video coach Brad Aldrich on May 23, 2010, in the hours after the team advanced to the Stanley Cup final for the first time in 19 years.

The firm's report released last week stated there was no evidence anything was done about the accusations after the meeting until then-team president John McDonough contacted the Blackhawks' director of human resources on June 14 after Chicago had won the title -- a delay that violated the organization's sexual harassment policy.

Cheveldayoff was assistant GM and senior director of hockey operations with the Blackhawks at the time.

"Kyle was failed by a system that should have helped him, but did not," the 51-year-old said Tuesday during a press conference in Winnipeg to discuss the NHL's decision to not discipline him for the scandal.

"I am sorry that my own assumptions about that system were clearly not good enough."

Cheveldayoff said the allegations were presented as harassment rather than assault, and he believed processes were in place within the organization to handle the matter.

The Jets GM met with NHL commissioner Gary Bettman in New York on Friday to discuss his role in Chicago's mishandling of the allegations, and was absolved of any wrongdoing.

The report, which came in response to lawsuits by Beach and a former high school student whom Aldrich was convicted of assaulting in Michigan after leaving the Blackhawks, found the allegations were largely ignored by management.

Cheveldayoff is the only person placed at the May 2010 meeting still employed in the NHL.

"If there was an understanding that there was a sexual assault, I believe it would have been handled much differently," he said. "And certainly the Kevin Cheveldayoff that's here today would have handled it."

Florida Panthers head coach Joel Quenneville, who was behind Chicago's bench from 2008 to 2018, resigned after a meeting with Bettman last week.

Blackhawks president and GM Stan Bowman stepped down following the report that's rocked the hockey world, while Al MacIsaac, another top Blackhawks executive, is also no longer employed by the club.

Beach took part in a gut-wrenching interview with TSN's Rick Westhead last Wednesday where he revealed himself as the "John Doe" initially named in the report.

The media availability was originally scheduled for Monday, but the team said Chipman suffered a recent bout of vertigo and insisted on being present.

"As we've seen, heard and learned, this has been a horrific week for Kyle Beach and all victims of sexual harassment and assault," Chipman said in an emotional opening statement.

"Kyle should be commended for not only sharing his story, but also serving as a courageous example to other survivors."

Bettman told reporters Monday during a virtual media availability that Cheveldayoff was "such a minor player in this" and "had no responsibility" for Chicago's mishandling of the situation.

Chipman said Cheveldayoff would have acted had he known the seriousness of Beach's allegations.

"Kevin Cheveldayoff was abruptly pulled into a single meeting, where there was a general inquiry about inappropriate texts and verbal comments," Chipman said. "He was told by the leadership of that organization that they would investigate it and look after it.

"He didn't know about the harm that had been done to Kyle. He couldn't have known."

Cheveldayoff has been GM and executive vice-president of the Jets since the team relocated to Winnipeg from Atlanta in 2011.

Bowman gave his assistant a glowing review when he was hired by the Jets.

"(Cheveldayoff) was a significant part of our front office and he played an integral role in the success of the Blackhawks throughout the last two years," Bowman said in a June 2011 statement. "I want to personally thank him for his dedication to our organization."

In a statement released by the Jets in July, Cheveldayoff said he "had no knowledge of any allegations involving Mr. Aldrich until asked if I was aware of anything just prior to the conclusion of his employment with the Chicago Blackhawks.

"After confirming that I had no prior knowledge of anything, I had no further involvement."

Cheveldayoff defended that statement Tuesday, adding there were legal ramifications at the time.

"I needed to try to say a bunch of things without being able to say that there was a meeting that happened in Chicago that, obviously, I've referenced," he explained. "After that I did not have any involvement. I was not part of the investigation. Three weeks later (Aldrich) was no longer part of the organization, and I was not privy to how that separation even transpired.

"While maybe (the statement) was a little wordy and a little bit curvy, it was 100 per cent true."

Aldrich, who has told investigators the encounter with Beach was consensual, continued to work for and travel with the team during those three weeks after meeting on May 23, 2010, celebrated Chicago's victory, eventually had his name etched on the Cup, and got a personal day with hockey's holy grail.

Former U.S. federal prosecutor Reid Schar, who led the investigation that included 139 witnesses and resulted in the 107-page report, said last Tuesday that Aldrich also "made an unwanted sexual advance" toward a 22-year-old Blackhawks intern during that time period.

The league fined the team US$2 million for "the organization's inadequate internal procedures and insufficient and untimely response" to Beach's allegations.

Chipman pledged Tuesday that he will push for change in the NHL.

"There are systemic problems that will require systemic solutions," he said.

Chicago -- a team the Jets have previously looked to for inspiration for its win-at-all-costs mentality -- also won titles in both 2013 and 2015 with McDonough, Bowman, MacIsaac and Quenneville at the helm.

"Nothing would give me greater joy than seeing the people who have supported us be able to celebrate a Stanley Cup," Chipman said of Jets fans. "But it'll never ever, ever, ever, ever be at the expense of a human being.

This report by The Canadian Press was first published Nov. 2, 2021.