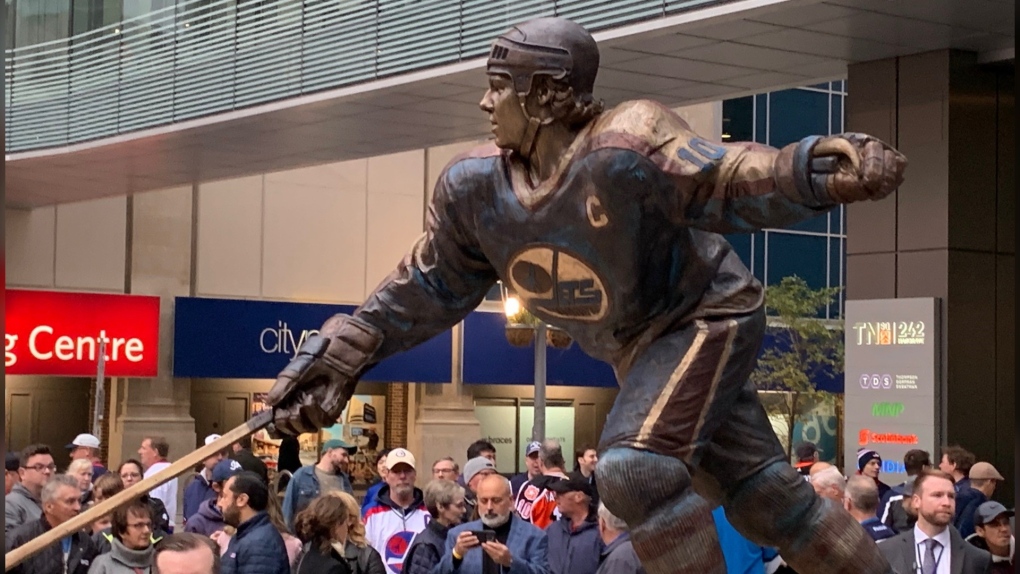 WINNIPEG -- Crystal Hawerchuk told a crowd of hundreds of people how much her late husband, Dale, loved the city and the province before the official unveiling of the statue of the greatest Winnipeg Jet of all time just outside of the Canada Life Centre on Saturday afternoon.

Then, 16 former Jets teammates unfurled the cover over the statue to much whooping and applause.

"Dale was notified of this honour shortly before he died and he was humbled by it," said Crystal, who is a Winnipeg native. "He led with a purpose. He inspired us all to be better people, he supported many charities, and he gave our family a beautiful life.

"Thank you to everyone for making this statue a reality."

Hawerchuk, who won the Calder Memorial Trophy as top rookie in 1981-82, posted five straight 100-point seasons over his nine years with the Jets and was the third-youngest player to score 50 goals in a season. He also played for Buffalo, St. Louis and Philadelphia. He scored a total of 518 goals and 1,409 career points in 1,188 career NHL games.

"This was so incredible," said Dale's son, Eric Hawerchuk. "First of all, my mom's speech was pretty unbelievable. She recited it to me a couple times. I know she was pretty nervous. But she got up there, she's a natural, right?

"It was very emotional. I kind of prepared for it, but just to see the sheer size of it and the attention to details is kinda hard to put it into words. But, I'm so proud of him and to see this here and to see all of the people here is just so amazing. It's still shocks me every time I see it."

Jets associate coach Scott Arniel started his NHL career in Winnipeg with Hawerchuk after the two played junior hockey together.

"We were friends for a lifetime," said Arniel, who fought back tears. "I was talking to him near the end. I told them they were going to make a statue of him and he said, `I can't believe it.'

"He grew up here as a hockey player, as a husband and a father. He loved Winnipeg. He meant an awful lot to all of us. This statue will remind everyone of the memories he left."

Jets executive chairman Mark Chipman said the original plan was to have Dale attend the unveiling.

"We didn't fully appreciate how his health had deteriorated," Chipman said. "We had made the decision to do this quite some time before that, and Dale had recovered.

"It was our hope that he'd be here today when we did this. His health declined very rapidly, and we were advised of that. We thought the least we could do is tell him."

"But what a tremendous honour to speak at his statue unveiling. He meant so much to me. It's one of those things I'll remember for the rest of my life."

The statue was sculpted by Erik Blome, who has also sculpted a statue of Wayne Gretzky, as well as other greats.

This report by The Canadian Press was first published Oct. 1, 2022.

There have never been so many renters in Canada, RBC report says

Royal Bank of Canada economists say the country has reached a record number of renters as the number of people renting has increased at three times the rate of homeowners in the past decade.

Putin calls nuclear weapons a tool of deterrence in Ukraine

Russian President Vladimir Putin on Wednesday hailed the annexation of Ukrainian territories as a major achievement and said his country's nuclear weapons serve as a tool of deterrence in the war that the Kremlin calls a 'special military operation.'

Bank of Canada raises key interest rate to 4.25 per cent, its highest since 2008

The Bank of Canada has raised its overnight rate by 50 basis points to 4.25 per cent, marking its seventh rate hike in nine months. The last time the bank’s policy rate was this high was in January 2008.

Scientists discovered the oldest known DNA and used it to reveal what life was like 2 million years ago in the northern tip of Greenland.