Jets vets get jump on Senators, roll to 5-3 pre-season win

Jets vets get jump on Senators, roll to 5-3 pre-season win 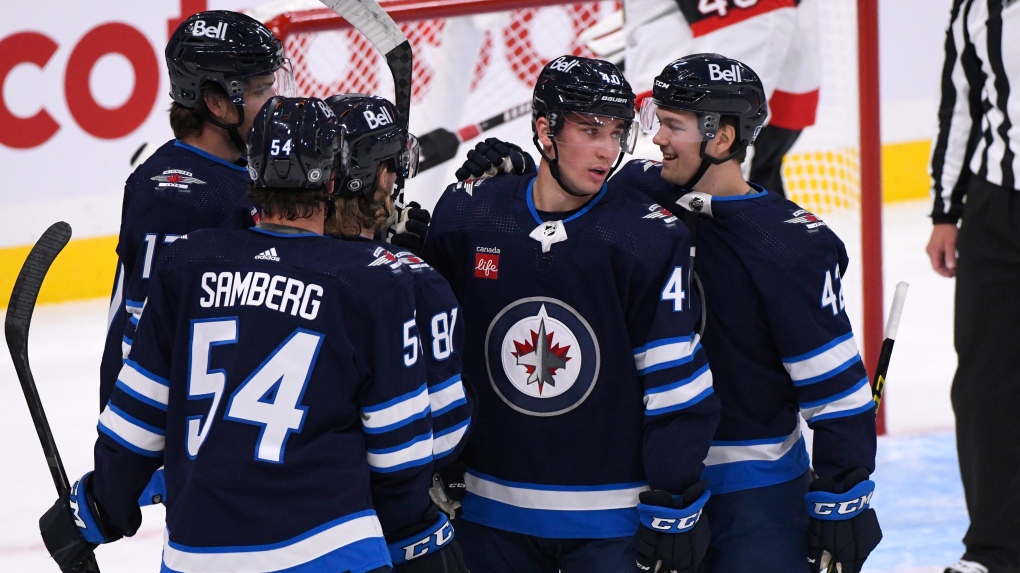 Winnipeg Jets' Daniel Torgersson (40) celebrates his goal against the Ottawa Senators with Simon Lundmark (42) and Dylan Samberg (54) during the first period of NHL pre-season action in Winnipeg on Sunday September 27, 2022. THE CANADIAN PRESS/Fred Greenslade

Daniel Torgersson scored twice and Kyle Connor had a goal and pair of assists as the Winnipeg Jets defeated the Ottawa Senators 5-3 in NHL pre-season action on Tuesday.

Mikey Eyssimont and Ville Heinola also had goals for the Jets, who scored three times in the second period.

Tyler Motte and Shane Pinto each had a goal and an assist for the Senators. Cole Reinhardt also scored.

Goalie Mads Sogaard started for the Sens, stopping eight of the nine shots he faced before being replaced by Kevin Mandolese after 29:48 in net. Mandolese stopped 11 of 15 shots.

The Senators iced a lineup without core players such as goalie Cam Talbot and forwards Brady Tkachuk and Tim Stutzle.

Winnipeg played most of its regular roster and featured a potential new top line -- Mark Scheifele centred Connor and Nikolaj Ehlers. The three have never played on the same line together.

The game was tied 1-1 after the first period and Winnipeg led 4-3 after the second.

The Jets got on the scoreboard 22 seconds after they killed a penalty. Connor found Torgersson in the slot and the 20-year-old Swede sent a one-timer past Sogaard at 13:55 of the opening period.

The Senators evened it up 40 seconds later when the Jets couldn't control the puck in their own end. Dylan Gambrell got the puck and passed it to Reinhardt, who sent a high shot past Hellebuyck at 14:35.

The second period opened with a faster pace and the Senators capitalized with some speed.

Pinto picked up the puck and raced with Motte down the ice on a two-on-one. Motte finished it off beating Hellebuyck on the blocker side at 7:40 for the 2-1 lead. The pair are expected to form Ottawa's third line with Mathieu Joseph.

The Jets made it 2-2 at 13:44 when Eyssimont tipped a Connor shot past Mandolese 28 seconds into a power play.

Torgersson quickly added his second of the night at 15:11, followed by Heinola's power-play goal at 19:10.

Pinto made it 4-3 when he scored with 24 seconds left in the middle frame.

Winnipeg regained a two-goal lead when a Connor shot bounced by Mandolese at 8:10 of the third.

The Senators had a power play with 2:04 left in the game, but couldn't score.

This report by The Canadian Press was first published Sept. 27, 2022.