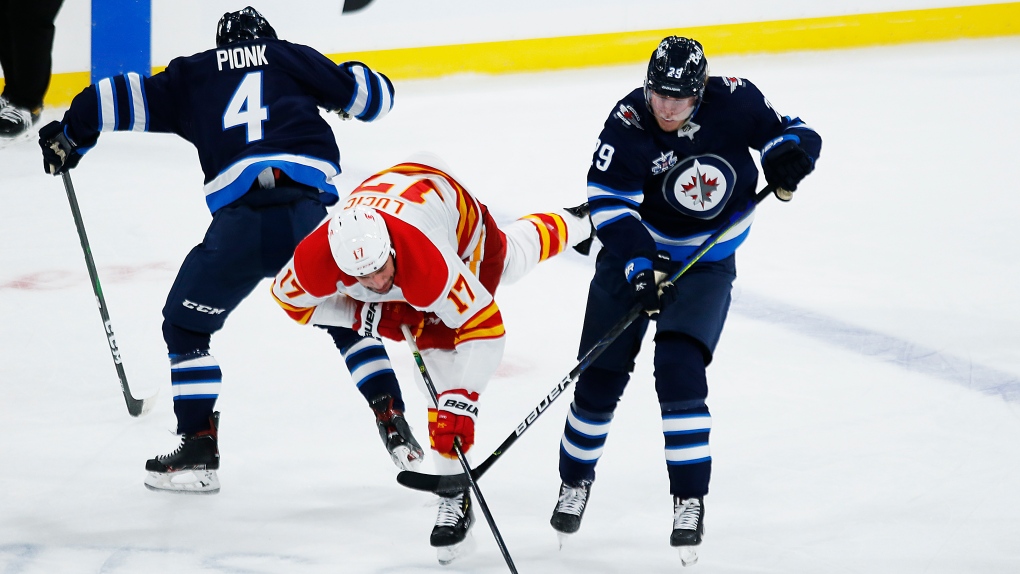 WINNIPEG -- Patrik Laine scored his second goal of the game in overtime, and the Winnipeg Jets started their season with a 4-3 win over the Calgary Flames Thursday.

The Finnish winger put away the winner 1:18 into extra time, using his speed to create space before beating Flames goalie Jacob Markstrom in tight.

The Jets (1-0-0) battled back from an early two-goal deficit, starting with a goal by Mark Schiefele just 34 seconds into the second period.

Laine and Kyle Connor each registered a goal and an assist for the Jets in regulation.

Elias Lindholm had a goal and assist for the Flames (0-0-1), while Matthew Tkachuk and Johnny Gaudreau also scored.

Markstrom made his debut for Calgary after signing a six-year, US$36-million deal in free agency and stopped 30-of-34 shots Thursday.

The game was a rematch of last year's playoff series where the Flames dispatched with the Jets in four games in the qualifying round.

Tkachuk was quick to put the Flames on the board Thursday, scoring on just the second shot of the game 4:28 in with a deflection in front of the Winnipeg net.

The lead didn't last long. Less than three minutes later, Jets defenceman Derek Forbort made a pair of big plays, first jumping into the Winnipeg crease to make a save as Hellebuyck lay sprawled at the edge of it.

Forbort then cleared the puck to Kyle Connor, who sprang Laine for a breakaway with a long pass.

The Finnish winger sent a wrist shot sailing past Markstrom to even the score.

The Flames went up again on a power play 11:24 into the first period after Winnipeg's Mathieu Perreault was called for goalie interference.

Nearing the end of the man advantage, Lindholm sent a pass through traffic to a wide-open Gaudreau at the side of the net and Gaudreau put a snap shot past Hellebuyck.

Lindholm netted a goal of his own about five minutes later, taking a pass from Dillon Dube and rocketing it into the top corner of the net to put Calgary up 3-1 heading into the first intermission.

Chris Tanev registered a secondary assist on the play, marking his first point for the Flames. The 31-year-old defenceman signed a four-year, US$18-million deal with Calgary in free agency after 10 seasons with the Vancouver Canucks.

Winnipeg wasted no time responding in the second frame.

Thirty-four seconds into the period, Nikolaj Ehlers took a shot from the slot and, while Markstrom made the stop, he couldn't control the rebound. The puck squirted out to Schiefele who popped it in from the side of the net to make it 3-2.

Whether Ehlers would play Thursday was in doubt until shortly before game time. The 24-year-old left winger missed practice Wednesday due to COVID-19 protocols.

Winnipeg evened the score before the end of the second period, striking on a two-man advantage.

Calgary was already killing off a too-many-men penalty when Lindholm was called for hooking on Paul Statsny.

Winnipeg's power play got to work and Laine found Connor, who sent a one timer past Markstrom to knot the score 3-3.

The period ended with some dramatics after Noah Hanifin cross-checked Connor into the boards.

Laine responded by going after Hanifin and a scuffle ensued, with several members of each team jumping in.

Hanifin was called for cross-checking, and Laine and Tkachuk were each sent to the box for roughing.

Markstom made the save of the night with less than three minutes to go after rushing back to his net, stick-less after playing the puck behind the net. Stastny took a shot at the wide-open net, but the Swedish netminder appeared out of thin air and snatched the puck with his glove.

Thursday was the first of nine meetings between the two clubs in the pandemic-condensed 56-game season.

The Flames will host the Vancouver Canucks on Saturday, and the Jets are set to visit the Toronto Maple Leafs on Monday.

This report by The Canadian Press was first published Jan. 14, 2020.