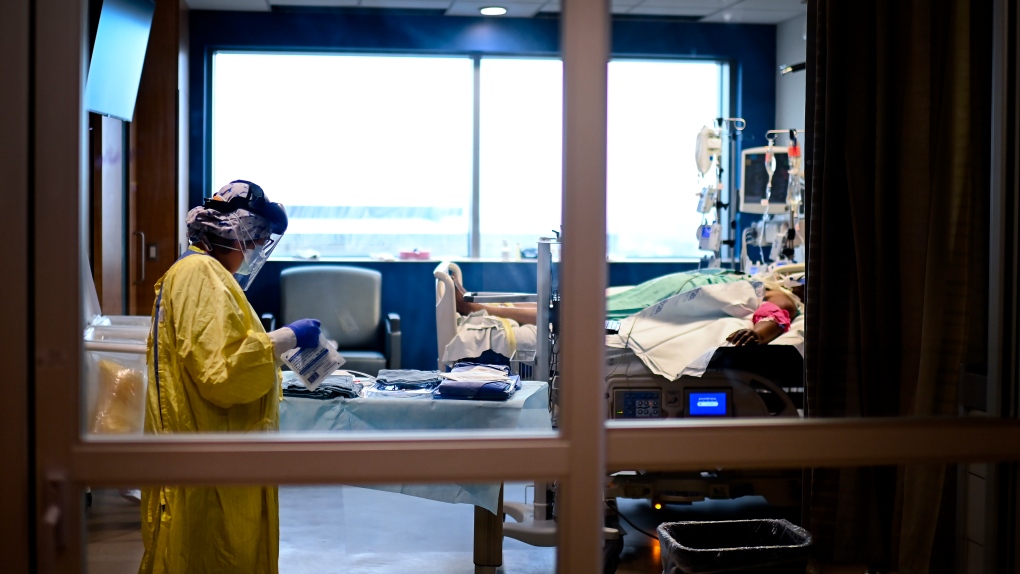 An ICU health-care worker shown inside a negative pressure room cares for a COVID-19 patient on a ventilator at the Humber River Hospital during the COVID-19 pandemic in Toronto on Wednesday, December 9, 2020. THE CANADIAN PRESS/Nathan Denette
WINNIPEG -

Manitoba's official opposition is calling on the government to increase nurses and other health-care staff in intensive care units throughout the province.

This comes after the NDP said they received a report from Manitoba's health minister, which shows there is a 25 per cent vacancy rate of nurses in Manitoba's ICUs.

"For the past year and change, we have been living with public health restrictions that we were told were to buy us time to strengthen our health-care system. Now, even as we look ahead to a reopening, we see there are still many, many positions empty in the ICU," said Manitoba NDP Leader Wab Kinew.

He noted there is a good chance the province will see a fourth wave along with the return of flu cases in the fall.

"We need a health-care system that is strong enough to deal with the regular strain that we have, plus the continued presence of COVID later this year."

NDP Health Critic Uzoma Asagwara said the PC government has failed to invest in health-care during the pandemic.

"Seeing these huge vacancy numbers in regards to ICU, is it actually creates more questions. So I look at this data and I'm wondering, are nurses still redeployed and we have these vacancy rates, or are these numbers going to increase as nurses go back to working in the areas eventually, that they originally came from?" said Asagwara.

"Are nurses still working with an increased patient load that they have been telling us for months is unsafe and has resulted in Manitobans receiving a substandard level of care in situations and nurses increasingly being burnt out."

The NDP said the report shows there are 111 full-time equivalent positions that have been unfilled in critical care units in Winnipeg and Brandon and that hospitals that have been used as COVID-19 centres are seeing the highest vacancy rates—nearly 30 per cent in the ICU at the St. Boniface Hospital, 20 per cent at the Health Sciences Centre ICU, and 28 per cent at the Grace Hospital ICU.

Asagwara called for the Health Minister needs to explain why the vacancy rates are so high and also address how the government is going to lower the rates.

In a statement to CTV News, Health Minister Heather Stefanson said nursing vacancy rates have been a long-standing challenge in Manitoba and across Canada. She said the issue has been exacerbated by the pandemic.

Stefanson said Shared Health is in the process of posting and hiring 60 EFT critical care positions that were announced in May, and said 16 more critical care nurses are working in the system as of July 11.

Along with this, Stefanson said Shared Health is looking to increase the number of seats in nursing education programs in Manitoba, and is hiring senior practicum students as they graduate.