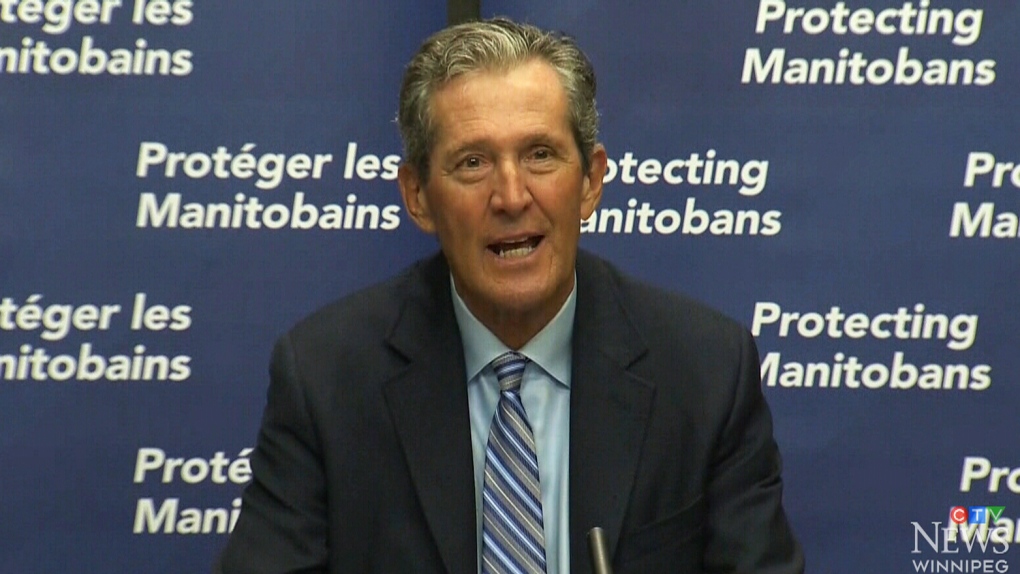 Manitoba Premier Brian Pallister apologized Tuesday for comments he made almost a month earlier that angered Indigenous leaders and cost him a cabinet minister.

"I wish my words in speaking to Manitobans at this difficult time had been said differently so they could have been understood better," Pallister said in a press release.

"My words did not adequately convey all that I meant, which I sincerely regret."

Pallister said he takes responsibility for having caused the misunderstanding July 7, when he denounced people who had toppled two statues on the legislature grounds in a protest over the deaths of Indigenous children at residential schools.

Pallister said people who came to Canada -- before and after it was a country -- did not come to destroy but to build communities, businesses and churches.

Indigenous leaders have said the premier downplayed the harmful effects of colonialism, and Pallister initially stood by his comments. He said he meant to convey that Indigenous and non-Indigenous people often worked together to build Canada.

His Indigenous relations minister, Eileen Clarke, resigned from cabinet. Her replacement, Alan Lagimodiere, stirred up more controversy by defending some of the intentions behind residential schools. He later apologized.

Some members of the Progressive Conservative caucus have also distanced themselves from Pallister's remarks, and Winnipeg Mayor Brian Bowman last week called on the premier to say he is sorry.

On Tuesday, Pallister spoke to the media for the first time in almost three weeks and took back his remarks.

"I feel awful about the reaction and the misunderstanding I created with my comments," he said during a news conference about COVID-19 restrictions.

Pallister also said his words were misrepresented as support for colonialism or residential schools.

"I should have been clearer in my comments but my heart was in the right place."

The Assembly of Manitoba Chiefs said Pallister did not offer a full retraction.

"If you have to qualify an apology, then it's not an apology," said Grand Chief Arlen Dumas.

"And really, there's no excuse. The premier has been involved in public office for decades. There's an expectation that you speak well and you're mindful of the words you use."

"He's not really clearly saying that he did anything wrong. He's just sorry for the fact it was misunderstood."

Pallister's Tories have dropped sharply in recent opinion polls and he is now facing signs of dissent from some of his caucus members. Conservation and Climate Minister Sarah Guillemard posted on social media last month that she could not support words that hurt people affected by trauma.

Pallister has hinted he may retire from politics before the next election in 2023. When asked by a reporter Tuesday whether he plans to leave office in the coming months, he did not directly answer.

"You'll be among the first to know if that's the decision."

This report by The Canadian Press was first published Aug. 3, 2021.

A Canada-wide warrant has been issued for a man who police say killed an Ontario couple that disappeared earlier this month.

Prime Minister Justin Trudeau says that he intends to name his new cabinet in October, bring Parliament back 'before the end of fall,' and implement the promised federal vaccine mandate as soon as possible. Chrystia Freeland will continue as deputy prime Minister and finance minister, Trudeau said, adding that he intends to have conversations with the rest of his cabinet picks in the coming days.

A family and emergency physician in northeastern Ontario has been barred from issuing exemptions for COVID-19 vaccines, masking requirements and testing as he faces a disciplinary hearing before the province's medical regulator.

A rescue operation underway for 39 people stuck underground at Vale's Totten Mine in Sudbury, Ont., has successfully retrieved 33 miners. A team of doctors is on-site and checking workers as they emerge from underground.

Prime Minister Justin Trudeau says he hopes to share a decision on whether to ban Huawei Technologies from Canada's 5G wireless network rollout 'in the coming weeks.'

Three people have been arrested in connection with what police are calling a 'million-dollar heist' from a business near Toronto Pearson International Airport last spring.

The Assembly of First Nations and other Indigenous advocates are skeptical of the Canadian Conference of Catholic Bishops' $30-million pledge to residential school survivors, demanding the church be held accountable for its commitments.

'She cannot have died in vain': Anniversary of Joyce Echaquan’s death marked with calls to fight racism

A ceremony was held Tuesday marking the one-year anniversary of the death of Joyce Echaquan, an Indigenous woman who was humiliated by staff in a hospital northeast of Montreal as she lay dying, sparking outrage across the country.

Greens to appoint interim leader to steady troubled party, with May floated as option

Elizabeth May could return to the Greens as interim leader to stabilize the embattled party.