Manitobans remember massive blizzard that preceded 1997 Flood of the Century

The spring blizzard that preceded the Flood of the Century in southern Manitoba started 20 years ago today.

The blizzard lasted three days and dumped as much as 50 centimetres of snow on the Red River Valley.

“It was one heck of a challenge,” said Warkentin during a telephone interview on Monday.

Ste. Agathe resident and R.M. of Ritchot Councillor Jeannot Robert worked for the municipality during the flood of 1997.

When the blizzard hit, he knew it was bad news.

"They [the province] were predicting the possibility of a flood but very minor,” said Robert. “After that blizzard everything changed."

"At that point then we said 'ugh oh'...I think we better activate...get ready for some action."

Without a permanent ring dike, Ste. Agathe was one of the hardest hit communities during the flood of 1997. 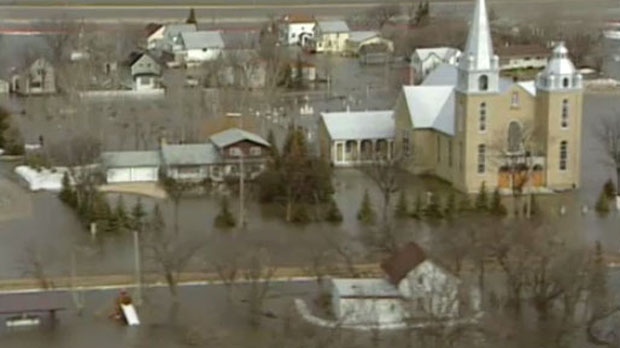 Despite the community and province’s best efforts to sandbag and construct a temporary dike the town lost the battle when water from the west spilled into the community.

Dozens of homes were submerged and hundreds of people were forced to leave town.

Warkentin said seeing the flood overtake Ste. Agathe was one of the hardest parts of the whole ordeal.

“It was a nail biter for a lot of people, in some cases more than a nail biter,” said Warkentin. “It was a very difficult, stressful time.”

The flood of 1997 was the most severe flood in Winnipeg and the Red River Valley since 1852.

Warkentin said the valley is now much better protected than it was back in 1997. Dikes have been raised and homes and businesses have been elevated two feet above 1997 flood levels. The capacity of the Red River Floodway has also been increased.

In the past 30 to 40 years Warkentin said flooding has become more common but he said knowing when the next big flood will hit is difficult to predict.

“What mother nature’s going to be doing in the future…that’s just about anybody’s guess.”