McDavid, Turris score in shootout to lift Oilers past Jets 2-1 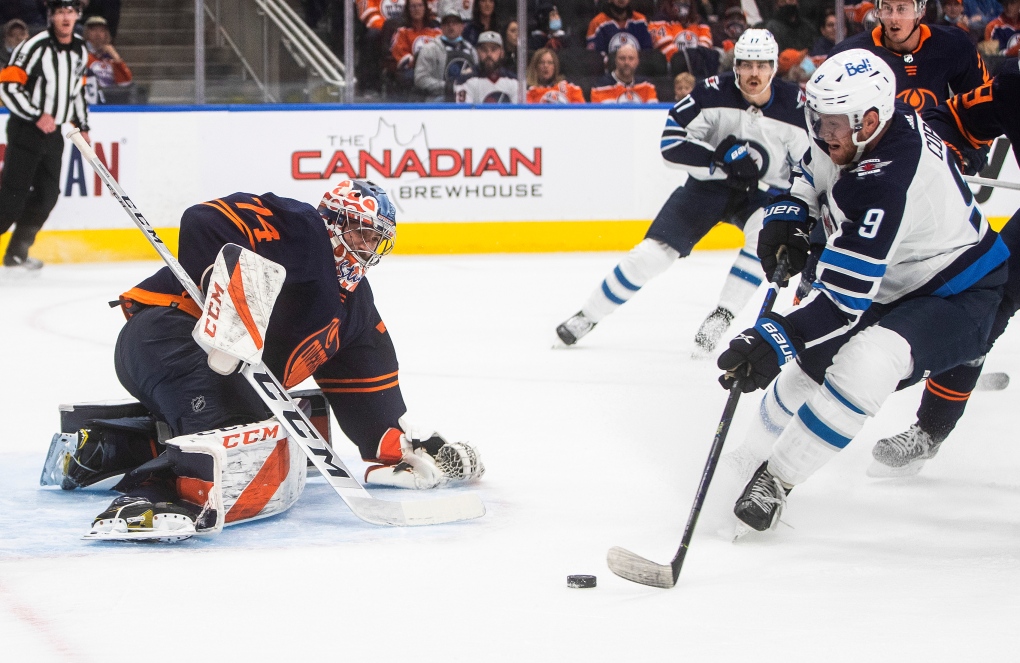 Connor McDavid and Kyle Turris scored in the shootout as the Edmonton Oilers emerged with a 2-1 victory over the Winnipeg Jets on Thursday.

McDavid also scored in regulation and rookie goaltender Stuart Skinner made 45 saves and was perfect on two shootout attempts for the Oilers (12-4-0) who improved to 7-1-1 on home ice.

Nikolaj Ehlers replied for the Jets (9-3-4), who had a three-game winning streak halted.

There was no scoring in the first period with the Jets putting 17 shots on Skinner and the Oilers directing 10 on Winnipeg starter Connor Hellebuyck. Skinner made the best save of the opening frame with 10 seconds remaining, stopping a point-blank shorthanded rebound by Andrew Copp.

It remained scoreless through 40 minutes, with the shots favouring the Jets 27-20.

The Jets finally broke the deadlock with 6:03 left in the third on their 33 shots of the contest as Ehlers beat Skinner high to the glove side from the top of the circle.

However, the Oilers came storming back just 28 seconds later as McDavid scored another highlight-reel goal as he danced through three Winnipeg defenders before beating Hellebuyck for his 11 of the year, extending his points streak to 16 games.

McDavid then unfortunately took a double-minor for high-sticking Mark Scheifele with 43.6 seconds left, but Edmonton was able to hang on and force overtime.

The Oilers had a heroic penalty kill in overtime to send the game to a shootout.

The Jets are right back at it on Friday in Vancouver against the Canucks. The Oilers remain home to host the Chicago Blackhawks on Saturday.

Notes: It was the second half of a home-and-home between the two teams, with the Jets winning the first chapter 5-2 on Tuesday in WinnipegΓÇª Out with injuries for the Oilers were forwards Derek Ryan (possible concussion) and Devin Shore (undisclosed) and goalie Mike Smith (lower body). Missing from the Jets lineup were forwards Paul Stastny (lower body) and Bryan Little (ear)... The Oilers came into the game with the league's top power play unit (42.6 per cent) while Winnipeg had the second-worst league-penalty kill at 64.3 per cent.

This report by The Canadian Press was first published Nov. 18, 2021.