Workers have been removing, piece by piece, the large base that held a statue of Queen Victoria. The statue was toppled last year by protesters. Its head was removed and thrown in the nearby Assiniboine River. The base is being removed to make way for a replacement. 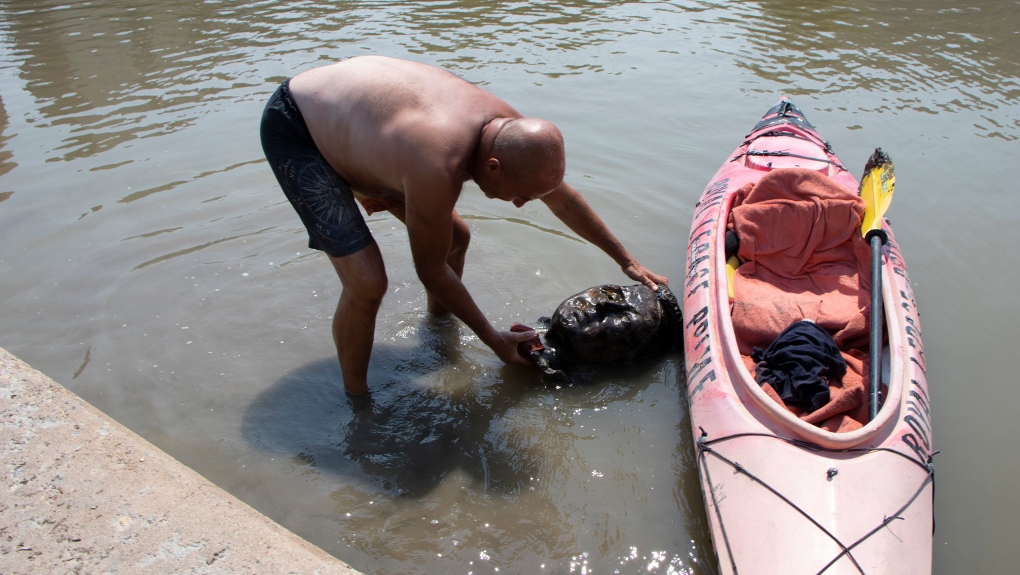 Kayaker Tom Armstrong fishes the head of a statue of Queen Victoria from the Assiniboine River in Winnipeg, Friday, July 2, 2021. Her statue and a statue of Queen Elizabeth II were toppled and vandalized on Canada Day during demonstrations concerning Indigenous children who died at residential schools. THE CANADIAN PRESS/Kelly Geraldine Malone

When crews recently removed one section of the base, they found a broken bottle and a note that had been placed inside. The note was an apology of sorts, dated July 30, 1921, -- an era when alcohol was outlawed.

"It says, on account of the Prohibition, we are unable to adhere to the custom of depositing a bottle of brandy under the stone, for which we are extremely sorry, I believe is what it says," Reg Helwer, minister responsible for government services, said Wednesday as he tried to make out the wording on the worn dispatch.

The note is signed by a stonecutter, other workers and a bureaucrat -- the province's deputy minister of public works at the time.

The government is now working out how to best preserve the document and what should be done with it.

Helwer said it's not the first time an item from Manitoba's early days as a province has been discovered unexpectedly.

"Apparently there are things of that nature around the legislature. As we move stones, we do discover things like this," he said.

"To me, it's a very neat story, especially with the age of the building, just recently celebrating a hundred years not long ago."

This report by The Canadian Press was first published Nov. 30, 2022

More disciplinary action may be coming now that the harrowing video of Tyre Nichols' treatment has been released. The Memphis police department is among many U.S. law enforcement agencies with 'duty to intervene' policies. Memphis police relieved two other officers of duty Monday and say the department is still investigating what happened.

A family in the remote First Nation community in Peawanuck, Ont., is dealing not only with the death of their young daughter, but the loss of everything they owned in a Jan. 28 house fire.

How did a radioactive capsule go missing in Australia and how dangerous is it?

Australian authorities are mounting an extensive search for a tiny radioactive capsule believed to have fallen out of a road train that travelled 1,400 km in Western Australia. Here's what you need to know:

As the B.C. government decriminalizes small amounts of hard drugs, critics note there are still not enough treatment resources for the users seeking them.

Two monkeys were taken from the Dallas Zoo on Monday, police said, the latest in a string of odd incidents at the attraction being investigated -- including fences being cut and the suspicious death of an endangered vulture in the past few weeks.

Ukraine is pushing its Western allies to provide it with fighter jets, a week after winning pledges of sophisticated modern tanks to help it beat back Russia's invasion force after almost a year of fighting.