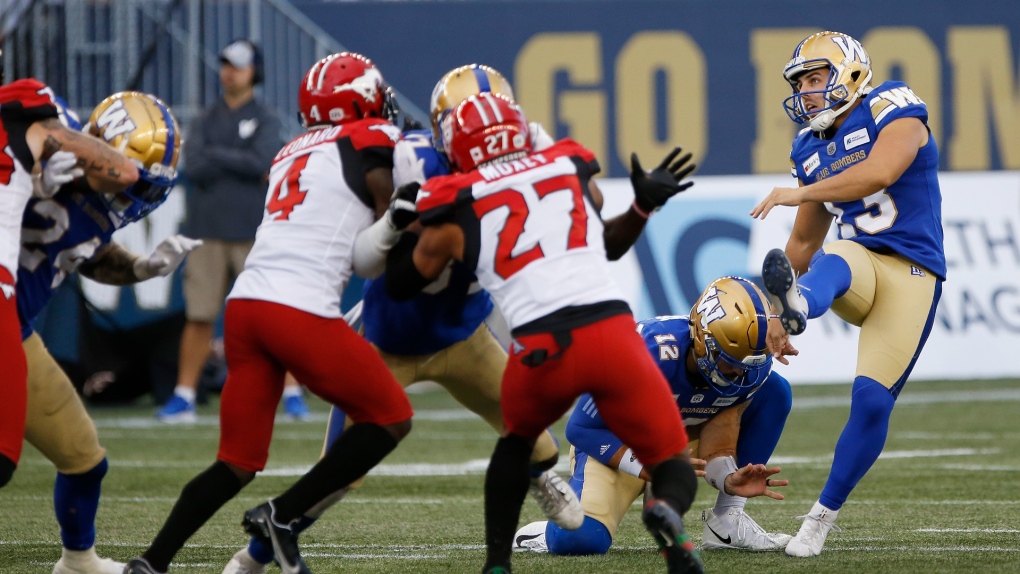 Rookie kicker Marc Liegghio made a 45-yard field goal with 37 seconds left in his first CFL start and the Winnipeg Blue Bombers defeated the Calgary Stampeders 18-16 on Sunday.

Calgary veteran kicker Rene Paredes had a chance to win the game with two seconds remaining, but he missed a 52-yarder -- his first miss of the season.

Liegghio also connected on field goals from 50, 42 and 37 yards out. The Western University product from Woodbridge, Ont., was making his pro debut in place of injured Tyler Crapigna.

Paredes had booted a 33-yard field goal with 1:49 remaining to give his team a 16-15 edge before Winnipeg came back for Liegghio's memorable kick. Paredes also made field goals from 35 and 39 yards out, putting him at 12 of 13 on the season.

Bombers (3-1) star running back Andrew Harris, making his CFL season debut after missing the first three games with a calf injury, finished with 17 carries for 81 yards and one touchdown in front of 22,806 fans at IG Field that cheered after his first run.

Winnipeg quarterback Zach Collaros completed 16-of-25 pass attempts for 243 yards with no touchdowns and no interceptions.

Stampeders (1-3) rookie quarterback Jake Maier threw a Calgary club-record 17 straight completions. He finished 30 of 39 for 307 yards with no TDs and no picks.

Maier, making his second start in place of injured veteran Bo Levi Mitchell (broken leg), was a perfect 16 of 16 through the first half, added another completion early in the third and then had a pass go incomplete.

Winnipeg led 6-3 after the first quarter. Calgary was up 13-9 at halftime and had a 13-12 edge after three quarters.

The Bombers responded to a Paredes 35-yard field goal midway through the first quarter with Harris' touchdown.

The drive got a huge boost with a 50-yard catch-and-run by receiver Rasheed Bailey, who sped down the sidelines and got a key block before being tripped up at Calgary's two-yard line.

After pushing in for the TD on the next play, an elated Harris spiked the ball in the end zone. Liegghio went wide on the convert attempt and Winnipeg was up 6-3.

Paredes hit a 39-yard field goal at 4:36 of the second quarter, a drive aided by Hergy Mayala's 22-yard reception with his team on second down and 14.

Liegghio made his 50-yarder at 9:14 of the second quarter, capitalizing on a turnover after Calgary receiver Josh Huff was the victim of a forced fumble recovered by Bombers linebacker Adam Bighill.

The Stampeders replied with a four-play, 75-yard drive that Carey finished with a 17-yard run up the middle into the end zone at 11:44.

Bombers receiver Kenny Lawler had a 77-yard touchdown reception wiped out early in the third after it was ruled he was down by contact. It ended up being a 33-yard reception and Liegghio capped the drive with a 42-yard field goal at 7:19 to make it 13-12.

Winnipeg's next drive was aided by a Calgary roughing-the-passer penalty that got the Bombers close enough for Liegghio's winning kick.

This report by The Canadian Press was first published Aug. 29, 2021.

A Ukrainian court sentenced a 21-year-old Russian soldier to life in prison Monday for killing a civilian, sealing the first conviction for war crimes since Moscow's invasion three months ago.

Ukrainian President Volodymyr Zelenskyy called for 'maximum' sanctions against Russia during a virtual speech Monday to corporate executives, government officials and other elites on the first day of the World Economic Economic gathering in Davos.

A memorial to mark the one-year anniversary of the announcement of the detection of an unmarked burial site at the former residential school at Kamloops, B.C. starts early Monday with a ceremony at sunrise and concludes with a closing evening prayer.