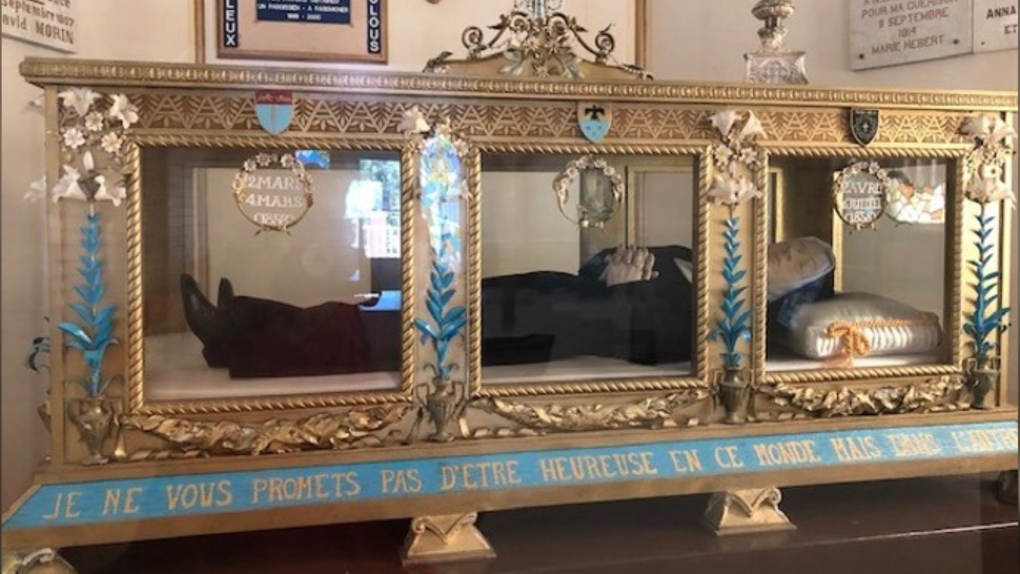 The small statue depicting Saint Bernadette of Lourdes (pictured) in a small chapel on the Our Lady of Lourdes Grotto grounds near St. Malo. (Submitted: Leo Roch)

A Manitoba parish is hoping a saint's statue stolen from a historic grotto near St. Malo will be returned before an annual pilgrimage.

Leo Roch, the co-director of financial matters at the Blessed Margaret Parish, said the theft happened sometime in June. He said someone stole a small statue depicting Saint Bernadette of Lourdes, which was resting in a glass coffin in a small chapel on the Our Lady of Lourdes Grotto grounds near St. Malo.

"From one day to the next, it disappeared. We've been trying to encourage whoever took it to bring it back, but so far we've had no success," Roch said.

He said someone would have had to crawl through a Plexiglas wall that separated the casket from the chapel. He suspects it was a prank.

He said the theft was reported to RCMP, but because the replica statue has no monetary value, the parish would like it back – no questions asked.

The hope is the statue will be found in time for the annual pilgrimage to the grotto, which is scheduled for Aug. 21. The annual event, which was cancelled the past two years due to COVID-19, is expected to draw around 1,000 people.

"It's a very gorgeous, nice place to have a service like that," he said. "It's been growing over the last few years. And we're hoping that this year it'll be even better, especially after a two-year absence."

However, Roch said it is looking like they will have to move forward without Saint Bernadette.

"Unless it comes back without damage, it could still be there for the pilgrimage, but that's very doubtful now," he said.

He said if the statue is not returned, the parish will look at buying another one.

How a deadly crush at an Indonesia soccer match unfolded

A soccer match at a stadium in Indonesia has ended in disaster, with at least 125 people killed and more than 320 injured after police sought to quell violence on the pitch, authorities said on Sunday. This is how events unfolded.

Marking one month as a judge on the Supreme Court of Canada, Michelle O'Bonsawin, speaks with Evan Solomon about why she wants people to see her as a judge first and the first Indigenous justice to sit on Canada's highest bench, second.

Russia attacked the Ukrainian president's hometown and other targets with suicide drones on Sunday, and Ukraine took back full control of a strategic eastern city in a counteroffensive that has reshaped the war.