A Winnipeg actor who scared up a lead role in a new horror flick is getting set to screen her movie debut.

Madison MacIsaac landed the role of Sydney in “Bring It On: Cheer or Die”, the latest installment in the beloved cheerleading franchise now taking a turn into the bloody fun of the slasher genre.

The television movie tells the story of a cheer squad practicing at an abandoned school over Halloween weekend, when an unknown killer starts to take them down one by one.

MacIsaac, 20, was cast in the Winnipeg-shot film last fall after a trying first audition. She attempted to read lines for the casting director over Zoom while on a family vacation in Riding Mountain National Park. Wonky WiFi and lagging video signals rendered her audition totally mute. 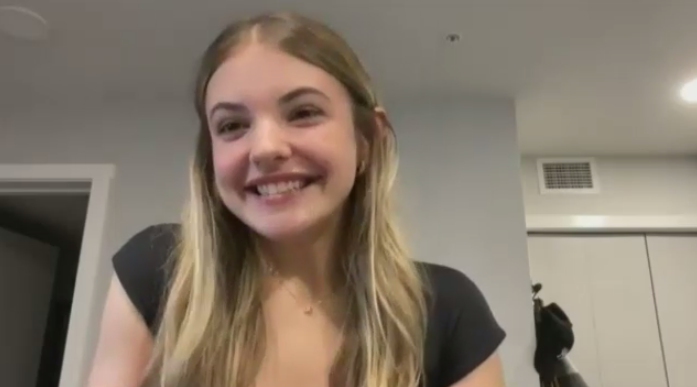 Winnipegger Madison MacIsaac packed up her car and was on route to Vancouver to try her hand at acting on the west coast when she got word she had been cast in the latest instalment of the "Bring It On" franchise.

She sent in a taped audition instead, but even that presented its own technological challenges.

“I was standing on top of benches and stuff, putting my phone up trying to get that transfer to send, to get that tape through,” MacIsaac recalled in an interview with CTV News Winnipeg.

Weeks went by without a word, and MacIsaac had all but written the opportunity off. So much so, she packed her things in her car and was en route to Vancouver to try her hand at acting on the west coast.

“I got a call when I was in Medicine Hat that I had booked it,” she said. “So I just threw all my stuff in Vancouver and flew back home two days later.”

The project started with an intensive three-week cheer camp before filming began.

MacIsaac said she was initially intimidated by the cast of experienced film actors, but soon felt right at home.

“Everyone had this extensive background in dance or cheer. I was the only person in the cast that actually didn't have any experience with that,” she said. “But everyone was so welcoming and so supportive and so kind, and I never for a second felt like I wasn't supposed to be there.”

A year later, MacIsaac has finished filming another movie in a similar vein – the supernatural horror film “Elevator Game”, also shot in Manitoba.

Meanwhile, “Bring It On: Cheer or Die” debuted on video on demand services and DVD last week, and is set to premiere on the SYFY channel on Saturday.

“They'll have everyone come over, the whole family. We'll all watch it together. It's very sweet,” she said. “I can’t wait to watch it.”

The Winnipeg-shot film joins a long list of productions that rolled in Manitoba last year.

Cali Ramsey, executive director of On Screen Manitoba said 2021 marked the best year on record, with a production volume of $364.5 million, which amounted to about $1 million per day.

“Just to put that into context, in the year leading into the pandemic, we were at $269 million. So that’s almost a jump of $100 million coming out of the pandemic, so that’s a huge, huge jump,” she said.

Ramsey attributes the spike to pent-up demand after many productions were delayed during the pandemic. Still, she hopes the industry will be able to match, and perhaps exceed that figure in 2022. She notes there are about six new productions currently filming in Manitoba.

Ramsey said the boom comes with a number of opportunities for Manitobans, both in front of the camera and behind it.

“We need transport drivers, we need construction people, people working in the hair and makeup department. There are so many other roles that people can fit into in the industry, and we’re always looking for new faces to join in all of those departments,” she said.

Jennifer Lawrence shared her thoughts on the history of female-led action movies in a new interview, but the 'Hunger Games' star is getting some flak for not quite getting it right.