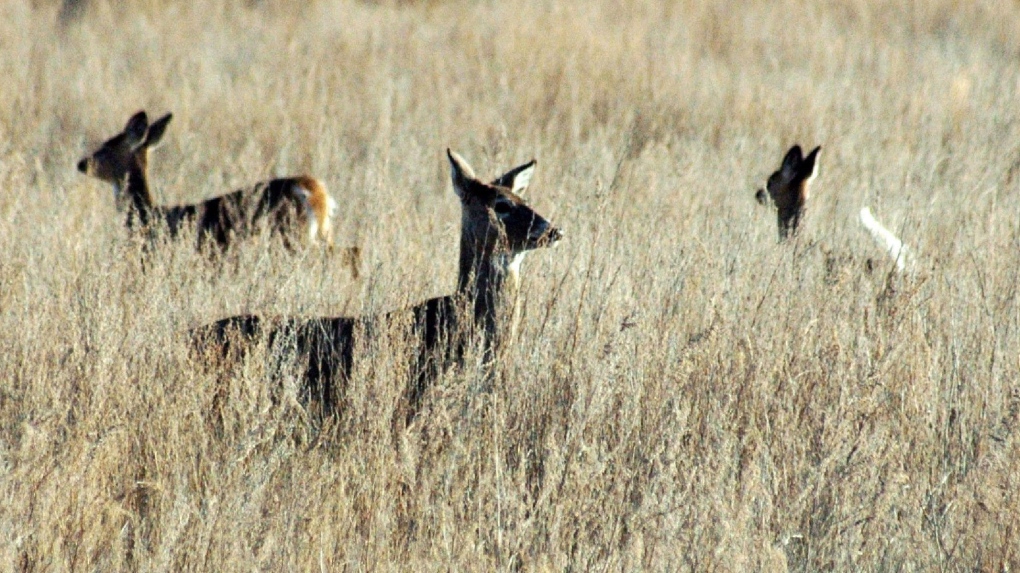 Deer walk in a field near Bismarck, N.D. in an April 19, 2012 file photo. (THE CANADIAN PRESS/APBrian Gehring/Bismarck Tribune via AP, File)

The Manitoba government is reporting new cases of chronic wasting disease (CWD) have been detected in the province.

Manitoba announced the news on Friday, saying that two more deer have been infected with the disease.

CWD is an incurable, fatal disease that impacts members of the deer family. It was first detected in Manitoba in 2021.

Animals infected with CWD can appear healthy until the later stages of the disease. If the disease spreads and becomes endemic to the province, there’s a chance that CWD will threaten the health of all of Manitoba’s deer populations.

The government notes the two new cases of CWD were found through mandatory biological sampling submissions of animals harvested near the Manitoba communities of Dropmore and Coulter – where CWD was previously identified. Both of the new cases were detected in male mule deer.

To prevent the spread of the disease, the province expanded the area from which samples are taken from hunted deer. All hunters in the mandatory sample submission zone must provide head and upper neck samples of harvested white-tailed deer, mule deer and elk.

According to the Manitoba government, CWD is not known to have human health risks; however, meat from an animal infected with CWD is not recommended for consumption.

Hunters who are active in the areas where the disease is a concern should have harvested animals tested, practice safe carcass handling, and avoid eating the meat of any animals that tested positive for CWD.

Authorities in Western Australia on Wednesday recovered a tiny but dangerous radioactive capsule that fell off a truck while being transported along a 1,400-kilometer (870-mile) Outback highway last month in what an official said was like finding the needle in the haystack.

A new report from the Heart and Stroke Foundation of Canada is highlighting 'significant inequities' in women's health care that is disproportionately affecting racialized and Indigenous women, members of the LGBTQ2S+ community and those living with low socioeconomic status.

A suspect in a violent kidnapping in Oregon died of a self-inflicted gunshot wound Tuesday night after being taken into custody following a standoff with law enforcement, a police spokesman said.

Andrew Tate, the divisive influencer and former professional kickboxer who is detained in Romania on suspicion of organized crime and human trafficking appeared at a court in Bucharest on Wednesday to appeal against a second 30-day extension of his detention.

The backlog of airline complaints to the Canadian Transportation Agency since December's travel chaos balloons by thousands, a Conservative MP raises concerns over the government's quarantine hotel spending, and a Toronto man raises money for charity after spending 24 hours in a diner due to a lost bet. Here's what you need to know to start your day.