The new garden at the West Kildonan Memorial Community Centre is helping to support newcomer families.

"Having a plot like this here to allow families, to allow youth come out to interact, share in something amazing," said Raymond Ngarboui, a community organizer with the Community Education Development Association.

Ten newcomer families are tending the garden, getting produce, fun and a sense of community in return.

The garden was inspired by the Rainbow Community Garden established in 2008 at the University of Manitoba by the Immigrant Integration Farming Community Co-op (IIFCC) in collaboration with Knox United Church.

According to Ngarboui, that garden now supports more than 200 families and has a waitlist.

This latest garden is part of a project established by the Winnipeg Food Council in response to an increase in demand for garden space during the pandemic.

"Our project participants have been dealing with anxiety and depression due to social isolation, especially with some families remaining inside their apartments for so long," said Ngarboui.

The West Kildonan garden is the second of its kind, with a similar garden first planted in St. Vital last year.

"We got our first one last year at the start of the pandemic, and here we are still a year later dealing with COVID-19. So it's been well used," said Brian Mayes, St. Vital city councillor and Winnipeg Food Council chair.

"I was stunned in St. Vital, like how much came out of what didn't seem to me to be a huge piece of land." 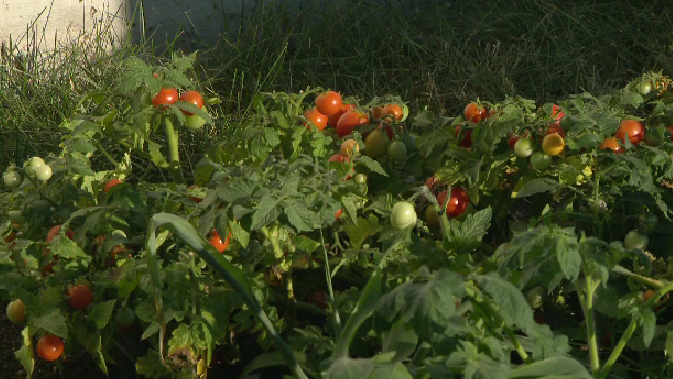 A picture of tomatoes growing in the new West Kildonan garden.

The families tending the garden, which come from nine backgrounds, including Syria, the Democratic Republic of Congo, South Africa, Central Africa and India, were asked what they would like to grow. While deciding was tough, the selected produce includes hot peppers, tomatoes, and okra.

Despite only planting in July, some of the families have already seen the fruits of their labour.

Ngarboui said he hopes to see the project expand across the city, with gardens popping up at schools and churches.

"If each of those organizations were willing to share space, that would be wonderful," he said.

-With files from CTV’s Stephanie Tsicos

Canada has now fully vaccinated 78.97 per cent of the country's eligible population.