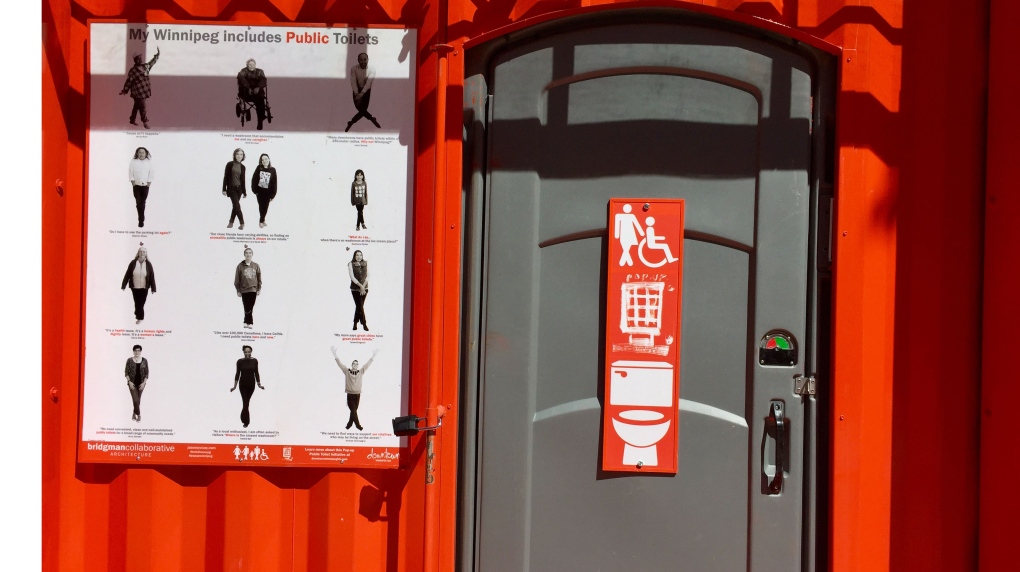 A new public toilet has been opened on Graham Avenue across the street from the Millennium Library. (Jon Hendricks/CTV News)

When the first person arrives at Holy Trinity Anglican Church in Downtown Winnipeg, they often find more than just a locked door.

"Somebody has used the building or surrounds as a toilet," said Rev. Enid Pow. "If people do not have a toilet to use, then they will find somewhere they can use."

Now they have a place to answer the call of nature. The Downtown Winnipeg Biz has set up a pop-up potty in front of the church. Built in a shipping container -- it's a pilot project lasting until September. Costing less than 100 thousand dollars, it's designed to offer a clean and accessible place to go when you gotta go.

"We're actually here to celebrate this need," said Wins Bridgman, of BridgmanCollaborative Architecture. "We all have a human need for washrooms."

In 2006, a public toilet in Memorial Park was torn down amidst concerns over crime and drugs. That won't be a problem here, according to Stefano Grande, CEO of Downtown Winnipeg BIZ. "The most important thing for us is to have 2 attendants at the public toilet. And so we decided to work with Siloam Mission, develop a social business incubator, have them manage the whole project for us."

The attendants are scheduled to be there 7:30 a.m. to 7:30 p.m., Monday to Friday, monitoring and cleaning the facilities. And when they aren't there, the walls come down, preventing anything from happening inside, including use of the washroom.

Which means it won't keep people from taking evening or early morning bathroom breaks on the grounds of Holy Trinity Anglican Church. The Downtown BIZ says there may be opportunities to extend the hours the pop up is open from time to time, such as when an event is going on at Bell MTS Place.

The toilets won't be limited to one location. The idea is to move them around Downtown until September. Some of the other planned locations include setting up near Portage Place mall, and off Main Street. Officials say it they hope this project will act as a conversation starter about permanent downtown toilets.