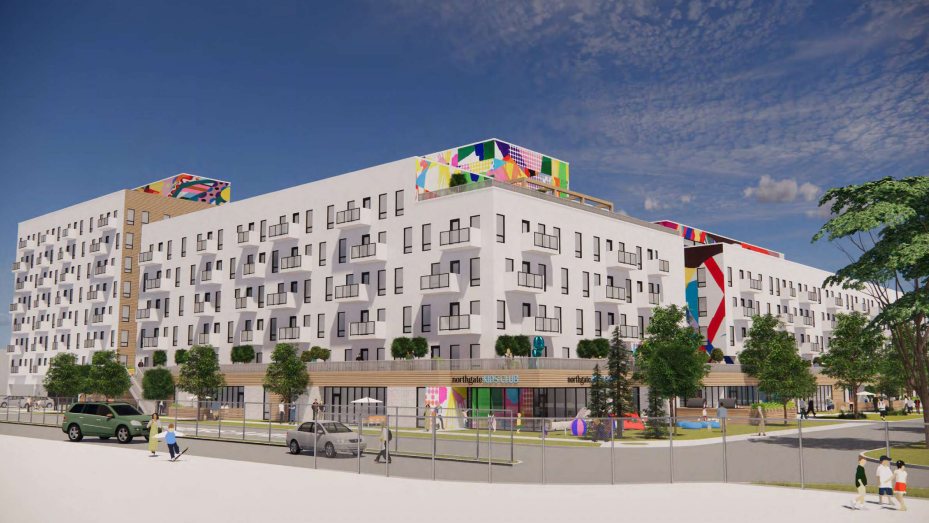 On the heels of new development plans being shared for the first time for C.F. Polo Park, another development near a mall is set to be discussed next week.

The Lord Selkirk – West Kildonan Community Committee is set to hear about the Northgate Residential proposed site and design on January 23.

The project would see three residential buildings around Northgate Shopping Centre at the corner of Carruthers Avenue and Cottingham Street.

Andy Gwaltney, a principal at LamarK World Corporation, one of the companies involved in the project, said this development would be beneficial to the City of Winnipeg.

"We have a site that's pretty much suited for infill housing because we have all the infrastructure, including amenities of our shopping centre right there," said Gwaltney.

He said this kind of project allows for a community to be built around where there is work and recreation, calling it, "a perfect fit for that neighbourhood."

The residences would all be pet friendly and feature pet parks, a library, an after-school club, and a play learning feature for kids.

Councillor Devi Sharma, who is part of the public hearing body, said it is important the community's voices and concerns are heard.

"It is crucial that we keep in mind the importance of creating complete and equitable communities. Encouraging development that provides a range of housing options, addresses affordability, and promotes sustainable lifestyles is vital to achieving this goal," she said in an email to CTV News Winnipeg.

"This proposal has the potential to make significant contributions in these areas, and I am excited to hear more about it at the public hearing, and work with my fellow Councillors to make a decision that will benefit our entire city."

Discussion on this development comes after Shindico and Cadillac Fairview released their plans for an 84-acre space surrounding C.F. Polo Park.

The companies are boasting a 'complete community' in the area and it will be a mix of residential, retail and green space.

Richard Milgrom, the head of the Department of City Planning at the University of Manitoba, said more cities are starting to see growth in 'peripheral centres' – like Polo Park and Northgate - as well as downtown cores, as there is enough growth to sustain both areas.

"The problem with Winnipeg is, as a place that's a little bit more moderate in its growth, even if it's better than it used to be, it's still pretty moderate compared to many places. That growth in one area tends to compete with growth in another area," he said.

He feels these kinds of projects could be a hindrance to the city's goal of revitalizing downtown and bringing people back to the core.

Milgrom wants to see a clearer plan from the city prioritizing where the growth needs to happen and what would benefit the city the most.

"I think we need to save the downtown. I mean, the downtown is the identifiable, unique place of every city. You know, we have a historic core, we have great historical assets there. When people talk about an identifiable place in Winnipeg, it's not going to be a bunch of new apartment buildings around a shopping centre. You can find that in many places," said Milgrom.

Angela Mathieson, the president and CEO of CentreVenture Development Corporation agrees that Winnipeg's downtown needs to continue to be a top priority for the city, but added she thinks projects like Northgate and Polo Park can be beneficial to the downtown.

"People are looking to live in a mixed kind of environment, where you have shopping and you can walk and you don't have to use your car and you have amenities close by," said Mathieson. "I think it bodes very well for the downtown because I think (downtown) is really that kind of quintessential type of community, where you have all those things, and really, quite frankly, more, including entertainment and all the major events that happen downtown."

She points to completed projects, like True North Square – which is seeing vacancy levels at around four to six per cent, which the owners say is standard in the industry – that has already capitalized on the mixed-use format.

Mathieson and Milgrom both agree it's important the city utilizes and maximizes the infrastructure that is already in place.

"So when there are already places that are fairly dense residential developments or residential use in downtown, those might be places to start thinking about building off of," said Milgrom.

If the Northgate Residences is approved by the city, Gwaltney expects the first phase of the work could be done and ready for move-in by the end of 2024.

"We really want to be an integral part of the community for many years to come," said Gwaltney.