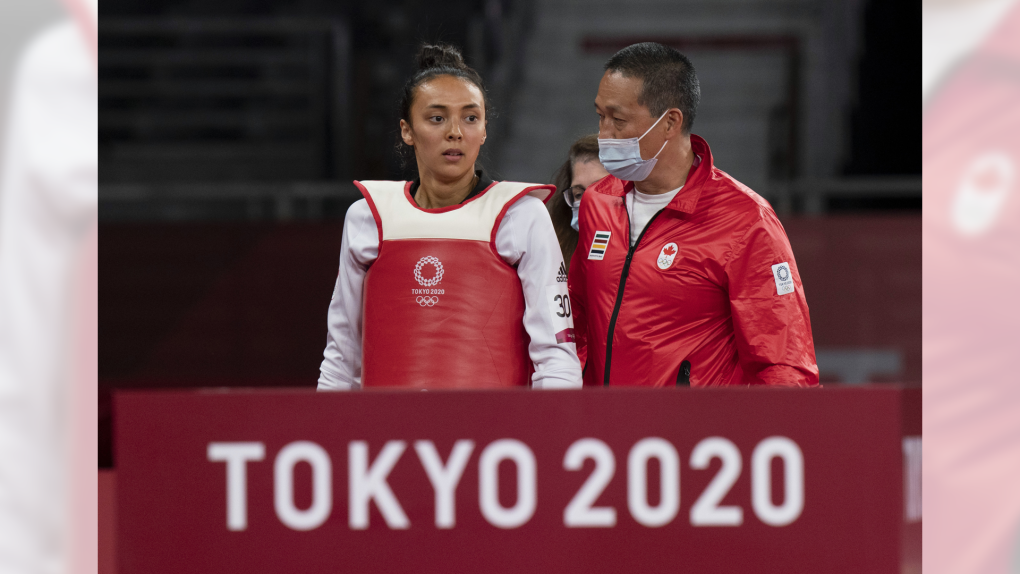 Skylar Park's voice cracked as she started to describe how much her family's support meant to her after coming up short in the women's 57-kilogram taekwondo tournament at the Tokyo Olympics.

Whether it was her brothers emulating the styles of her opponents in sparring, her dad's advice as he coached her to the Games, or her family watching back home in Manitoba, Park couldn't keep her emotions in check any longer after she was eliminated from the event's repechage bracket.

"It's disappointing when you have so much support behind you, not to get the results you want," said Park as she let tears roll down her cheeks.

A few steps away her brother Tae-ku, who had been Skylar's training partner in Tokyo, listened to his older sister. When Skylar told reporters about how much their family's support meant to her after an 18-7 loss to Taiwan's Chia-Ling Lo in the event's quarterfinal, Tae-ku leaned forward over a metal guardrail, putting his forehead on his arms to hide his face.

"He did everything from helping me warm up to getting me water and packing my bags," Skylar said of her brother. "He's been incredible."

Taekwondo is literally the family's business.

Jae Park -- Skylar's father and coach -- runs Tae Ryong Park Taekwondo and Hapkido Academy in Winnipeg, which he co-founded with his father Deuk Park in 1993.

The Parks have been aiming for Olympic glory for generations.

"The goal for me was always the gold medal, but I think realizing what it means to be an Olympian and even to be here at the Olympics surrounded by the world's best athletes is incredible," said Skylar, 22, the first member of her family to make a Games.

"The Olympic dream started with my grandpa when he was in Korea so to finally have an Olympian in the family and hopefully more to come, is very special."

Skylar had been one of the first Canadians in any sport to qualify for the Tokyo Olympics. When COVID-19 protocols prevented her from travelling for competitions or even sparring with local opponents to stay sharp, her brothers stepped up, emulating the fighting styles more typical of women to help their sister stay sharp.

Jae Park said he was struggling to balance the twin roles of father and coach after his daughter's loss.

"I have to be a dad, not a coach. The coach part is over," he said. "I don't know if I'll be very objective in terms of my thinking (as a coach).

"I think that's the hard part for me overall is that balance. Push her as a coach or do I let her let my baby suffer?"

Skylar Park had beaten her Taiwanese opponent in previous matchups but struggled against the taller Lo in the Olympic quarterfinal.

Both Park and Lo started the bout cautiously, with the referee repeatedly urging them to be more aggressive. Lo scored a trunk kick with 19 seconds left in the opening round for a 2-0 lead.

Defence continued to dictate the pace in the second round, with Lo adding to her lead for an 8-2 lead after two. Park tried to be more aggressive in the final round, but Lo continued to press her advantage after they traded trunk kicks in the first 20 seconds but couldn't catch up on points.

Jae Park said it was clear to him that his daughter was shaken by the magnitude of fighting at the Olympics even though she had won gold at the Pan Am taekwondo championship this year and silver at the 2019 Pan Am Games. He said that even though Skylar had a strong third round to beat Australia's Stacey Hymer 25-15 in the round of 16 earlier Sunday, it was apparent something was off.

"As soon as she got off the mat (against Hymer) I said 'how do you feel?' and she goes, 'Dad, this is so different,"' said Jae. "She's won medals at the worlds, she's won medals at Grand Prixs, but she came off going like 'I don't know what it is it's just, I just feel like this is so much different."'

Park's loss means that Canada's Olympic medal drought in taekwondo will last at least 16 years. Karine Sergerie won silver in the martial art at the Beijing Olympics in 2008.

The Park family, however, plans to be at the 2024 Paris Games in full force, with both Jae and Skylar saying that she and her two brothers will represent Canada at the next Summer Olympics.

"So next one in Paris we'll be better prepared," said Jae. "Hopefully, Canada is proud of her. I mean, as a family we are. She tried her best."

This report by The Canadian Press was first published July 25, 2021.

Four in 10 Canadians polled in a recent online survey say they're vote is being influenced by how they feel the federal government handled the COVID-19 pandemic.

As the federal party leaders make their final push to Canadian voters, new polling data suggests that the Liberals and the Conservatives are in a dead heat.

Election day 101: Questions and answers about the voting process

From finding the right voting location to bringing acceptable ID, CTVNews.ca breaks down what you need to know before casting your ballot.

Advice for voters on the eve of election day: A Q&A with Elections Canada spokeperson Diane Benson

On CTVNews.ca: A transcript of an interview with Diane Benson, spokesperson at Elections Canada, who answered questions on reduced polling stations, how students can vote, and other challenges facing voters in a pandemic election.