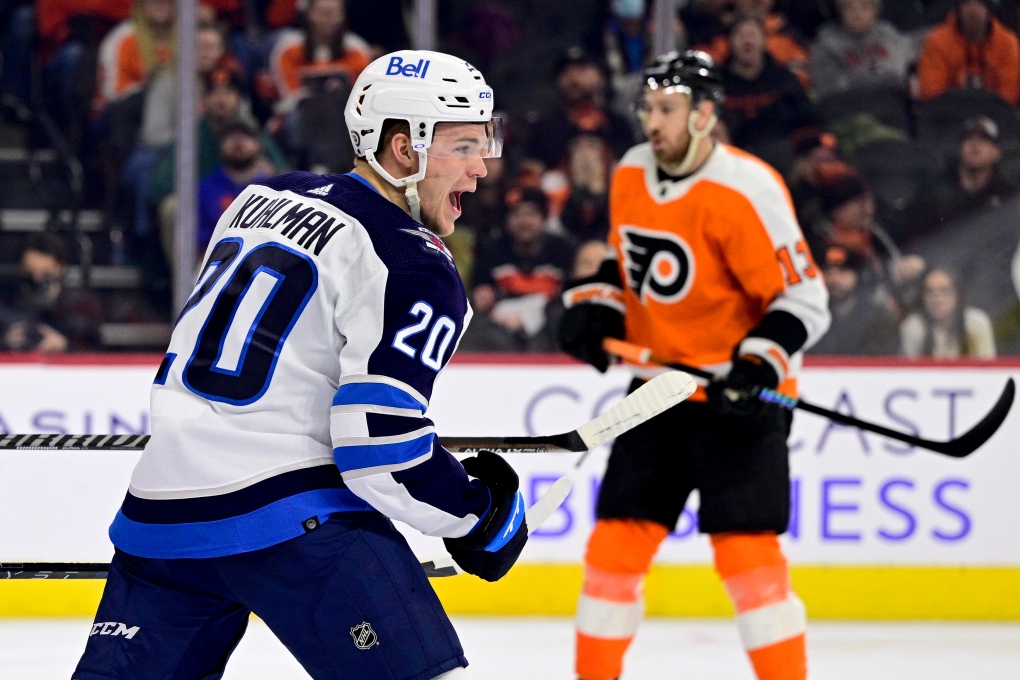 Winnipeg Jets' Karson Kuhlman (20) celebrates after scoring a goal during the third period of an NHL hockey game against the Philadelphia Flyers, Sunday, Jan. 22, 2023, in Philadelphia. (AP Photo/Derik Hamilton)

Karson Kuhlman also scored, Kevin Stenlund had an empty-netter and David Rittich made 28 saves for the Jets, who improved to 2-2 on a five-game road trip that concludes Tuesday in Nashville.

Kevin Hayes scored twice while playing in his 600th career game, and Ivan Provorov added a goal for Philadelphia.

Kuhlman broke a 3-3 tie with 11:16 left in regulation when his seemingly harmless shot from the side of the net went through Felix Sandstrom's legs. Sandstrom, Philadelphia's backup playing in his first game since Dec. 13, made 25 saves.

The Jets flew out to a three-goal lead in the first 8:31.

Jonsson-Fj├ñllby scored on a waist-high deflection from close range over Sandstrom's right pad 4:53 into the contest. Connor recorded his 24th goal and team-leading 57th point 1 1/2 minutes later when he finished a 2-on-1 with Cole Perfetti by firing a hard wrist shot over Sandstrom's left shoulder from a sharp angle.

Scheifele tallied his team-best 29th goal to end the early barrage, completing a beautiful passing play with Blake Wheeler and Nikolaj Ehlers that led to an easy tap-in from just left of the crease.

Provorov, who drew national headlines on Jan. 17 by sitting out warm-ups because he didn't want to wear a pride-themed jersey due to his religious beliefs, got the Flyers on the board with his third goal of the season. Owen Tippett set up the play by waiting out defenceman Nate Schmidt's sliding attempt to defend the pass and sending the puck across the front of the net to Provorov.

Hayes pulled Philadelphia within 3-2 with the only goal of the second period. Noah Cates passed down low to Hayes, who ripped a wrister from nearly parallel to the goal line into the top left corner for a power-play tally.

Hayes tied it 2:35 into the third with another power-play goal, following up a rebound with another good wrist shot from an angle.

The Jets improved to 14-10-1 on the road and 10-9 against the Eastern Conference. ΓÇª Philadelphia dropped to 10-12-1 at home. ΓÇª Jonsson-Fj├ñllby did not return after leaving with 4:45 left following blocking a shot with his foot. ΓÇª Philadelphia fans, still riding high after the Philadelphia Eagles' 38-7 divisional game victory over the New York Giants on Saturday, broke out in several "E-A-G-L-E-S!" chants throughout the contest.

Jets: At Nashville on Tuesday night.