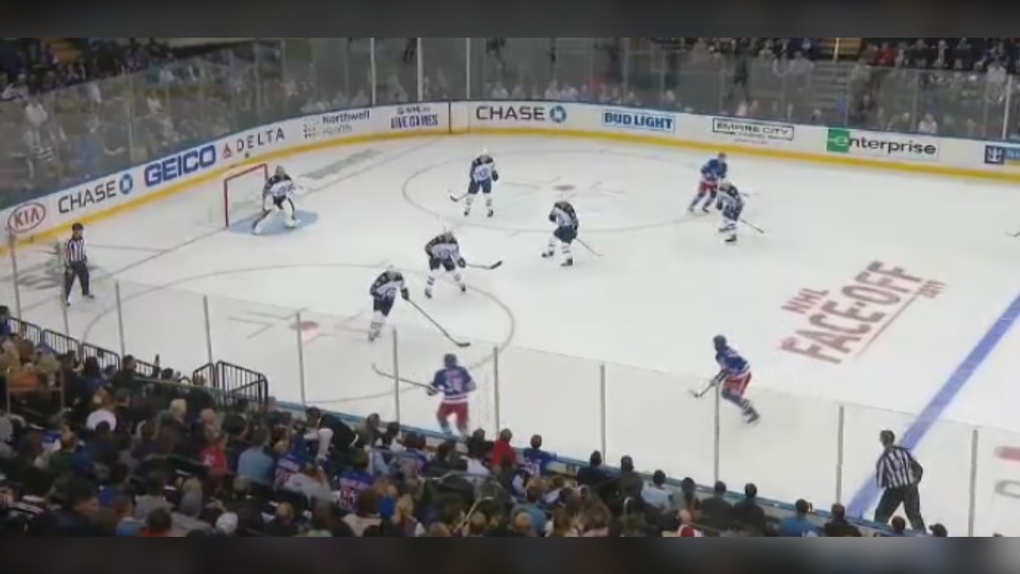 NEW YORK -- Artemi Panarin and Jacob Trouba came through in their New York debuts, and Mika Zibanejad had a big game to help the Rangers get the new season off on a winning note.

Brett Howden broke a tie with 4:09 remaining, and the Rangers rallied with three straight goals in the third period to beat the Winnipeg Jets 6-4 in a wild opener on Thursday night.

"Every player wants a successful start to the season, so we're all really happy we won today," Panarin said through a translator. "We were able to do it in the third period, a great team effort. We were really resilient to come back."

Zibanejad had a goal and three assists, Trouba had a goal and two assists, and Panarin had a goal and an assist for New York. Marc Staal also scored for the Rangers, and Henrik Lundqvist -- making his 14th consecutive opening-day start -- stopped 43 shots for his 450th career win.

"The first win of the season, that' s what it means to me right now," Lundqvist said of reaching the milestone. "It feels really good. ... There's no better way to start against a really good team and get a win."

On the go-ahead goal, Jesper Fast fired a shot from the left point that was blocked by former Ranger Neal Pionk. The puck went Howden, who scored to give New York its fourth lead of the game.

The Jets went on their fifth power play with 1:37 left, and were skating with a 6-on-4 advantage when Brendan Smith scored into the empty net with 17 seconds remaining to seal the Rangers' win.

"It certainly wasn't a Picasso out there, that's for sure, but we found a way to win," Rangers coach David Quinn said. "At the end of the day, that's all that matters."

"I feel like I played better than five goals against," Hellebuyck said. "It just seemed the puck was in the wrong spot for me tonight. If I look back on the tape, I probably won't do a whole lot different, but I got to do something because five is unacceptable."

Connor gave the Jets their first lead of the game, 4-3, with a power-play goal at 2:41 of the third as he tipped Josh Morissey's shot through Lundqvist's legs. Patrik Laine also had an assist on the goal.

Zibanejad, who had 30 goals last season, got a pass from Trouba, broke in on Hellebuyck and beat the goalie to tie it at 5:04.

With the Rangers on a power play carrying over from the end of the first period, Panarin -- signed to a seven-year, $81.5-million free-agent deal on July 1 -- got his first goal for New York just 27 seconds into the second. Zibanejad's shot from the right point was stopped by Scheifele, but the puck ended up in front and Panarin fired it in to put the Rangers up 2-1.

The Jets tied it just 30 seconds later as Wheeler scored off a cross-ice pass from Ehlers.

Trouba, acquired from Winnipeg in the off-season trade that involved Pionk, gave New York a 3-2 lead off a pass from Kreider at 6:03, but Wheeler tied it again just nine seconds later as he cut through defence and beat Lundqvist.

Lundqvist made two great saves on Scheifele and Laine on consecutive chances midway through the middle period, and had several nice stops on a Winnipeg power play late in the period.

"It was a little crazy, back and forth," Lundqvist said. "Lots of emotions, great atmosphere in the building. It was a lot of fun. ... We battled. Special teams came up big, power play, PK, and the new guys looked pretty good."

Staal, scoreless in the final 42 games last season, got the Rangers on the scoreboard first as he went around the back of the net and stuffed the puck past Hellebuyck on the right side with 8:25 left in the first.

Scheifele tied it for Winnipeg with 2:37 remaining in the period as he got a pass from Ehlers from behind the net and fired it in off Lundqvist's shoulder.