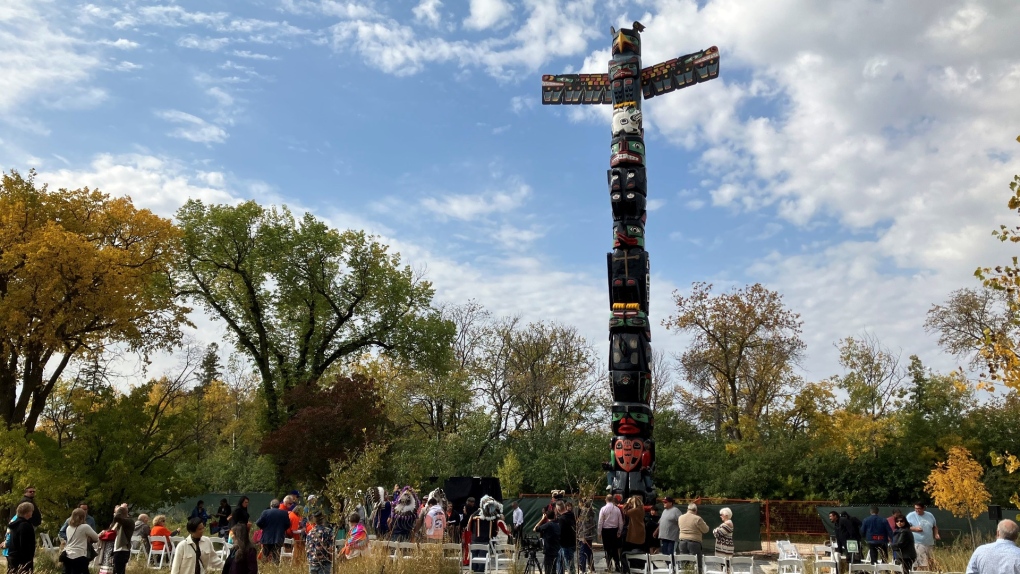 Visitors to Assiniboine Park can now learn more about the history of Canada's residential schools at a newly-erected totem pole that has been gifted to the Southern Chiefs Organization (SCO).

The Residential School Totem Pole, by Kwakiutl artist Charles Joseph, was raised Friday morning next to The Leaf in the southeast corner of Assiniboine Park. The totem pole is 21 metres tall, and tells the story of Joseph, who was taken away from his family as a child and forced into the residential school in Alert Bay, British Columbia.

“No matter where you came from in what is now known as Canada, the pain and genocidal legacy of residential schools continues to be felt by First Nation peoples and their families everywhere,” said SCO Grand Chief Jerry Daniels in a release. “I am honoured and humbled that Charles Joseph is allowing us to share his story through his art, as we continue our efforts to honour all Survivors and help with their healing.”

The totem pole was carved from a massive west coast tree and commissioned by Canadian businessman Jim Balsillie. Until recently, the piece had been on loan to the Montreal Museum of Fine Arts.

The SCO held a protocol ceremony for raising the totem pole Sunday morning. It will eventually be on display in the Hudson’s Bay building in downtown Winnipeg, as part of the organization's Wehwehneh Bahgahkinahgohn project.

A former student armed with a semi-automatic pistol and a revolver who killed four people and wounded 12 in two schools in Brazil had a swastika pinned to his vest and had been planning the attacks for two years, police said.