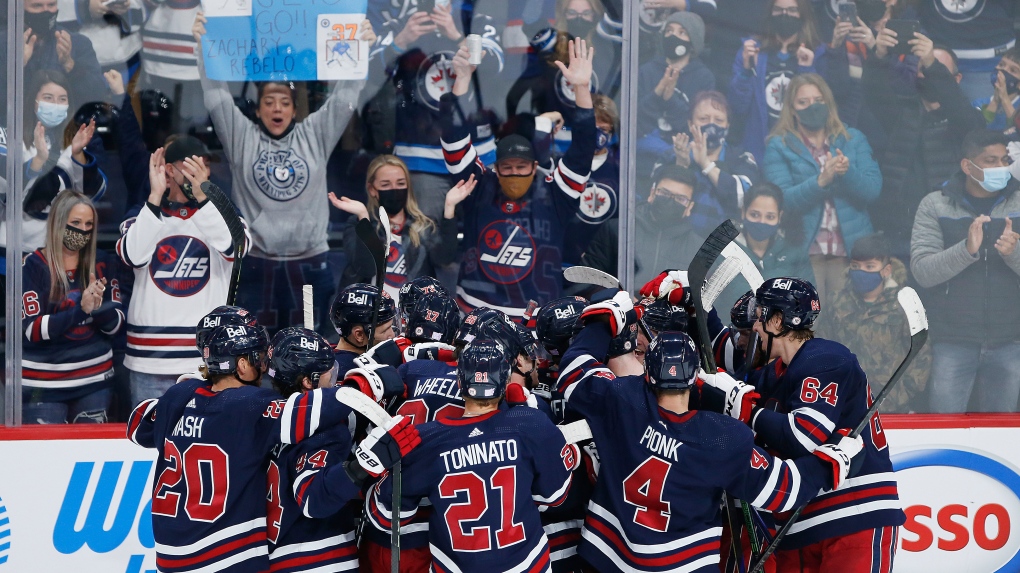 It was a long time coming for Winnipeg's perennial leading scorer.

In his eighth game of the season, centre Mark Scheifele snapped a personal scoring drought when he scored 32 seconds into overtime to give the Jets a 3-2 victory over the L.A. Kings on Saturday night.

Forward Nikolaj Ehlers set Scheifele up for his first goal of the season before 17,776 fans at the Canada Life Centre.

"Yeah, it felt good," Scheifele said. "It was a great pass by Nikky (Ehlers). It felt good to end that one. It was a grind of a game and we started to pick our game up toward the end of the third period and play a little more grinding style. You need to be able to pull those ones off in this league."

Winnipeg goalie Connor Hellebuyck made 27 saves on 29 shots as the Jets improved to 8-3-3 on the season.

Kings netminder Cal Petersen stopped 20-of-23 shots in the loss.

Winnipeg defenceman Dylan DeMelo tied the score 2-2 with the Jets shorthanded 13:36 into the third period. Centre Andrew Copp set him up for a clear shot that beat Petersen. It was DeMelo's first goal as a Jets player, and first goal since March 21, 2019 when he was with the Ottawa Senators.

"It felt great," DeMelo said. "Obviously, a huge relief. There was definitely some frustration. Obviously, when you play defence, you're not relied on to score, but you want to contribute and there's no feeling like scoring, obviously. So it was nice to get that one and the timing was crucial, and to be able to contribute in that sense, it feels really good."

Former Jets forward Brendan Lemieux gave L.A. a 2-1 lead at 14:22 of the second period when he pounced on the rebound of a shot by centre Blake Lizotte.

"Yeah, lot of friends over there," said Lemieux, who played 53 games with Winnipeg between 2017 and 2019. "Any time you go into the third period up and you don't come out with two points, it sucks. It feels like a loss but, in the grand scheme of things, we definitely see this trip as a win.

Kings forward Carl Grundstrom tied the score at 1-1 early in the first period when his seeing-eye shot from a bad angle beat Hellebuyck over the shoulder.

The Jets opened the score early in the game. Kyle Connor, the team's leading scorer, netted his 11th of the season when he pounced on his own rebound after a point shot by Logan Stanley just 1:59 into the game.

"It's a game that we're all disappointed in because it got away on us because I thought we played a real solid game, maybe one of the better ones on the road," said Kings coach Todd McLellan. "We checked, we were first to a lot of pucks. We had a tenacity to us that was real good. I think we had a really good hockey club frustrated.

"Two special situations -- one on the power play and one in overtime -- gave them a chance at a win. That part is disappointing."

The Kings return home to host the Washington Capitals in the first of a seven-game homestand.

Winnipeg will host the Edmonton Oilers on Tuesday, the last of a seven-game homestand.