Environment and Climate Change Canada issued a severe thunderstorm warning for Winnipeg earlier in the day, but it ended around 10:30 a.m.

According to the Manitoba RCMP, there was a three-vehicle crash at St. Mary’s and the Perimeter, with minor injuries. Lights are out at the intersection and drivers are asked to avoid the area.

The Winnipeg airport is also experiencing some delays because of lightning in the area. Customers can check with their airline or the airport’s website for more information.

Photos circulating on social media show flooding in the south part of the city, Waverley Heights and Transcona. 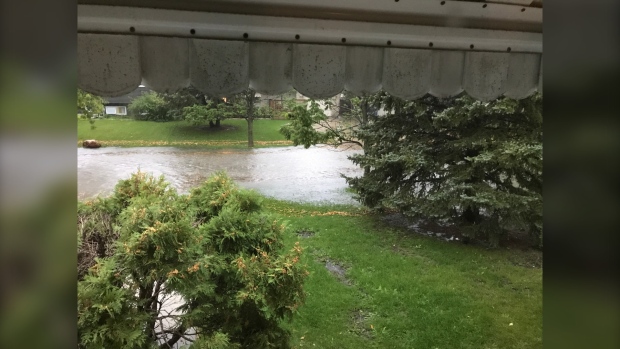 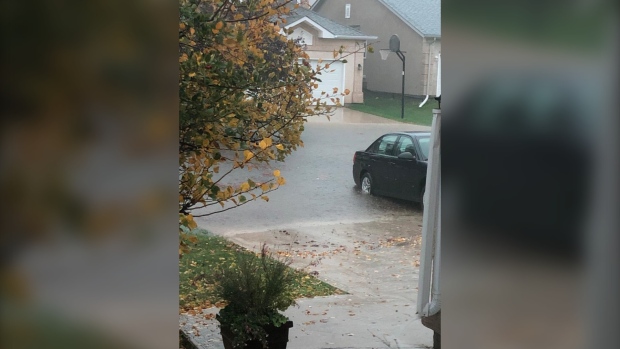 Flooding across the city

St. Vital Centre said the storm has caused some leaking and flooding, but food hall vendors that were closed for the cleanup have since reopened.

A video on social media also showed rain pouring through the ceiling of Winnipeg Square, as ceiling tiles fell to the ground.

Another video shared on Twitter showed a bus on Route 180 with water on the main floor rushing up to the stairs.

Environment and Climate Change Canada said Winnipeg received 30 to 60 millimetres of rainfall. It confirmed Elie was hit with 55 millimetres, while St-Lazare, Boissvain, Portage la Prairie, Gunn Lake, Brandon and Neepawa all receiving in the range of 27 and 34 millimetres.

CTV News Winnipeg spoke with a group of men who were helping push cars that were stuck and surrounded by water.

Amer Faysal said his own car got stuck, so he called the group to help him out. The men then proceeded to help out others in the same situation.

Faysal said they did it “to help people.”

City of Winnipeg responds to flooding

A spokesperson from the city said the Winnipeg Fire Paramedic Service is helping people who are trapped in flooded cars.

Water and waste crews are working on plugged catch basins, sewer backups and manhole covers that have come off or are ajar.

The City of Winnipeg asks residents to stay safe, drive carefully and try to avoid flooded areas. It notes it’s getting a lot of calls to 311 due to the weather, and non-urgent issues can be emailed to 311@winnipeg.ca.

Waves crashing towards the front door of my office on Chevrier Blvd. City bus as well as multiple cars stalled. #mbstorm pic.twitter.com/9GgQQjqMdW