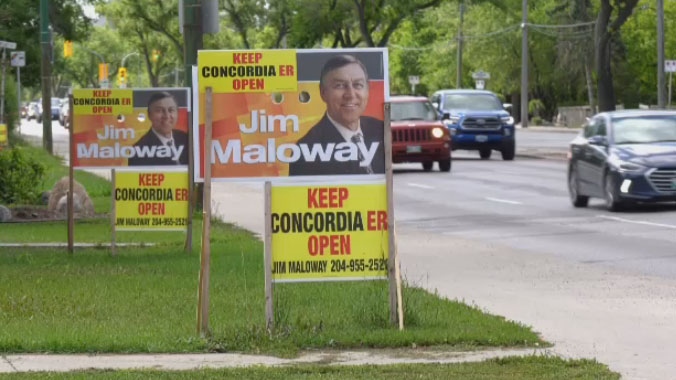 NDP candidate Jim Maloway said his signs fall within regulations and are on private property.

Election signs in some Winnipeg neighbourhoods have area residents worried – and it has nothing to do with the message.

One section of Henderson Highway is dotted with large signs, and it has some people concerned about driver safety.

“Similar to a snowbank you do have to edge up a bit because the sign at the corner there blocks oncoming traffic,” he said.

NDP candidate Jim Maloway said his signs fall within regulations and are on private property.

The City of Winnipeg has bylaws that regulate signage on public property.

Elections Manitoba’s Alison Mitchell said when it comes to the size of signs, there’s very little they can do. She said they do receive complaints about signs for various reasons and it’s fairly standard around election time.

“The only issues that Elections Manitoba can address with respect to signage are authorization and if a sign is within 50 metres of a voting place on voting day,” she said.

Long-time Elmwood resident Malcolm Roberton has a suggestion for how signs should be placed.

“If you’re going to put it within the first five feet of your property it has to be smaller, if you want to put it back, it can be bigger,” he said.

- With files from CTV’s Lizzy Symons