Tattoo industry says it can reopen safely in Manitoba 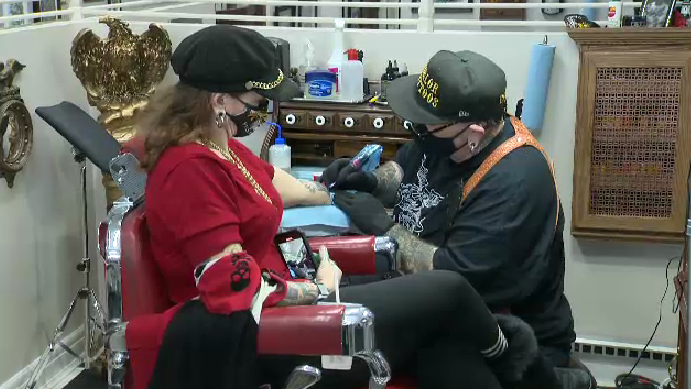 WINNIPEG -- The tattoo and body art industry in Manitoba is calling on the government to not forget them when Code Red restrictions are lifted.

In a news release, The Manitoba Body Art Association (MBAA) said it feels like its business owners might once again be left behind by Manitoba.

"In Minnesota, tattoo studies and salons were a part of the initial lockdown. Since their reopening in June, everything has gone smoothly. On November 20, their government implemented another shut down but tattoo studios and salons were allowed to remain open because the State Department of Health contact tracing showed personal services were not a source of transmission," said Rich Handford, who is a board member of the MBAA. "We have compiled data that indicates the same trend," he said in the news release.

The MBAA said it is wanting to have a dialogue with the provincial government and public health about reopening and it has sent plans to both groups showing how they are ready to operate safely.

The organization said it has received responses from NDP Leader Wab Kinew, Liberal Leader Dougald Lamont, Minister of Economic Development and Training Ralph Eichler, and NDP MLA Jamie Moses, but so far it the proposals haven't been answered.

"Getting a tattoo has had similar protocols to dental and medical procedures for almost 20 years. Most of these protocols have been in place longer before adding respiratory protocols and engineering controls for the general public," said Handford, who is also a Winnipeg tattoo artist.

"We've been in the business of protecting public health for almost 20 years."

The MBAA said it is hoping at the very least the government will collaborate with business owners so they can resume operating safely.

This comes after a tattoo shop in Winnipeg opened on Saturday despite the current health restrictions in place.

The Parlor Tattoos opened on Jan. 9. Owner Phil McLellan said he was worried about a fine, but he is more concerned about looking after his family of four.

McLellan also believes he can operate safely and has protocols in place to ensure that happens.

“We were at a place, certainly in early December, where we were in a trajectory that would’ve overwhelmed our health-care system,” he said. “Since then, we’ve seen a very gradual improvement, but the message was we needed Manitobans to stay home, to only go out for essential purposes.”

With numbers gradually improving, Roussin said Manitoba is now in a place to review restrictions, which are in place until at least January 22.