Evacuation orders are now in effect for northern parts of Whiteshell Provincial Park as flooding impacts hundreds of properties.

Amy Vereb, the owner of Otter Falls Resort, has been working to protect her property from the rising waters. She has been sandbagging and has put up a tiger dike which has failed to keep the flood waters at bay.

"It's gone over. It's breached over in the campground. It was holding back water up to about three days ago, and then just too much water started coming in," Vereb said.

Vereb said this is the worst flooding she has seen in the area, and it is not over yet. The area is expecting another two feet of water in the next 10 days, she said.

"There are people out here who are devastated. Their cabins are gone and that's all they ever had," Vereb said. "It isn’t just cottage country for people in the summer time and the spring time to come and enjoy. This is people's lives out here."

IN PICTURES: 'Overwhelming' flood in the Whiteshell Provincial Park

Manitoba Premier Heather Stefanson, along with government officials, took an aerial tour of the Whiteshell Provincial Park on Tuesday as the area deals with significant floodwaters.

Stefanson said they flew over Caddy Lake, West Hawk Lake, and Falcon Lake and said several areas have been completely washed out, adding several homes have been impacted.

"There's so much water out there, it's overwhelming," said Stefanson. "Our thoughts go out to those who have been negatively impacted."

"We have water coming from the south of us, we’ve got water now coming from the east of us. So we're surrounded by it," Stefanson said. "It's nothing new to Manitobans, I think we've dealt with floods in the past, but what is different is that it is coming from all angles."

With a state of local emergency declared in the Betula Lake area late last week, the province has ordered the evacuation in the northern area of the park – including Sylvia, Eleanor, Nutimik, and Betula Lakes, along with Otter Falls, Barrier Bay.

A spokesperson for the province said, while it doesn't track the exact number of people affected by the evacuation orders, there are about 600 cottages and 500 campsites impacted.

Manitoba's Minister of Transportation and Infrastructure Doyle Piwniuk said provincial assessments need to be done before determining what supports will be offered to those impacted by the flood.

"We are in response mode right now. We want to make sure everyone is safe, everyone protects their properties as much as possible," Piwniuk said.

NDP Leader Wab Kinew was also part of the flyover and said what he saw was striking.

"Cottages, homes, businesses, lodges being affected, both by the floodwater and the evacuation orders. Our hearts go out to everyone who is being affected. There is just so much water out there right now," said Kinew. 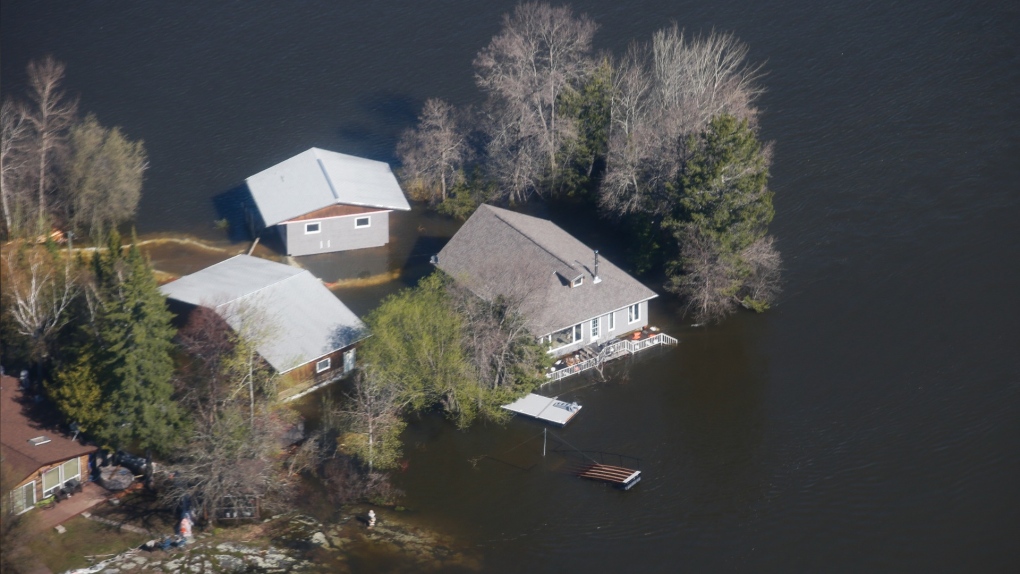 High water levels are washing out highway 307 and leading to several hundred residents being evacuated from the area just north east of Winnipeg, Tuesday, May 24, 2022. THE CANADIAN PRESS/John Woods

Kinew also acknowledged the work being done by provincial workers, along with emergency crews, to help the area deal with the flooding, saying stepping up in tough times is what makes Manitobans.

Vereb said her resort is now closed due to the evacuation orders.

"There's devastation out here. We need help," she said. "We're being shut down now but when this is all over, there is going to be a big mess to clean up and there's not going to be a Whiteshell to come to this summer if we don't clean up the mess after this is all done."

Her two kids are going to stay with family, while she and her husband stay behind in an effort to save their property.

-with files from CTV's Taylor Brock

Forty-six people were found dead in and near a tractor-trailer and 16 others were taken to hospitals in a presumed migrant smuggling attempt into the United States, officials in San Antonio said.

An Amtrak passenger train traveling from Los Angeles to Chicago struck a dump truck Monday in a remote area of Missouri, killing three people and injuring dozens more as rail cars tumbled off the tracks and landed on their sides, officials said.

As long lines persist, Canadians travelling in the next 24 to 48 hours are being given priority at some passport offices.