'These are people's children': Group remembers 199 Manitobans who died from addiction 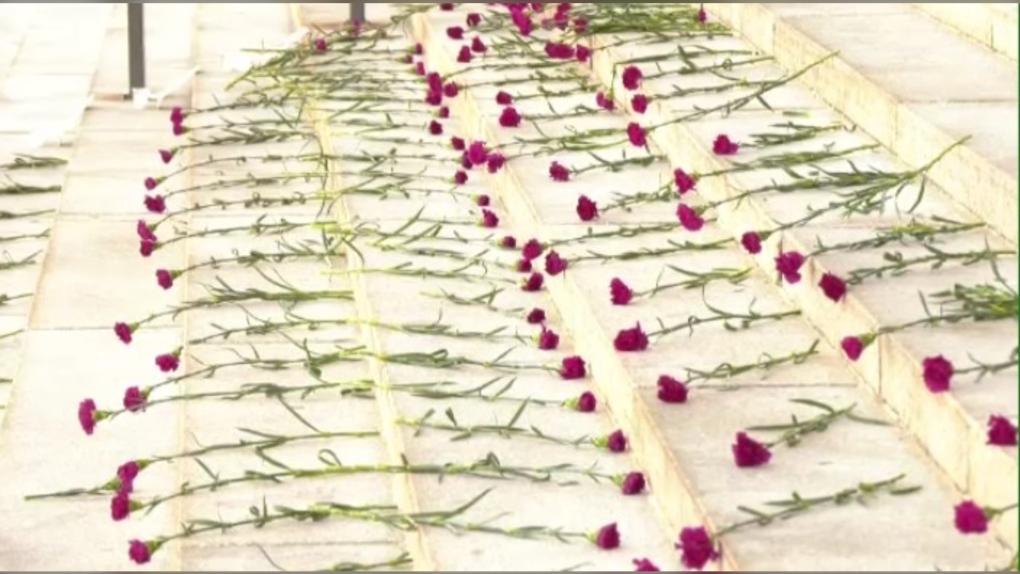 One Winnipeg group took to the Manitoba Legislative Building on Wednesday to remember those who died from addiction.

“These lives could be saved. These losses are preventable,” said Nicki Dewar, whose 31-year-old daughter died from opioid poisoning in May.

To represent the lives lost and mark National Addictions Awareness Week, the group gathered at the legislative building, where they placed 199 purple carnations on the steps.

“Today we are here, at the steps of the [legislature] honouring loved ones gone too soon,” said Arlene Last-Kolb, co-founder of Overdose Awareness Manitoba.

Last-Kolb noted that the 199 people who died are not just numbers, they are individuals.

“These are loved ones. These are people’s children,” she said.

She said Manitoba is on track to have a “terrible” year in terms of the number of overdose deaths.

“We’re here to remind people that these are people,” Last-Kolb said.

“These flowers represent one individual, and there are 199 of them on the steps."

Last-Kolb said the group invited the premier and the addictions and mental health minister to the event. However, they were unable to attend.

She noted the officials did respond to the invitation, which is the first time they’ve received a response from a premier.

“This gives us a little bit of hope that Premier Stefanson will be willing to sit down and have a meaningful conversation about these 199 loved ones gone too soon,” she said.

Last-Kolb noted the group would like to see some policy changes, noting it advocates for safe supply.

“We need immediate access. We need medically-assisted detox. We need places to take people in the middle of the night when they ask for help,” she said.

Dewar said a lot of lives could be saved if people had a place to go to for help.