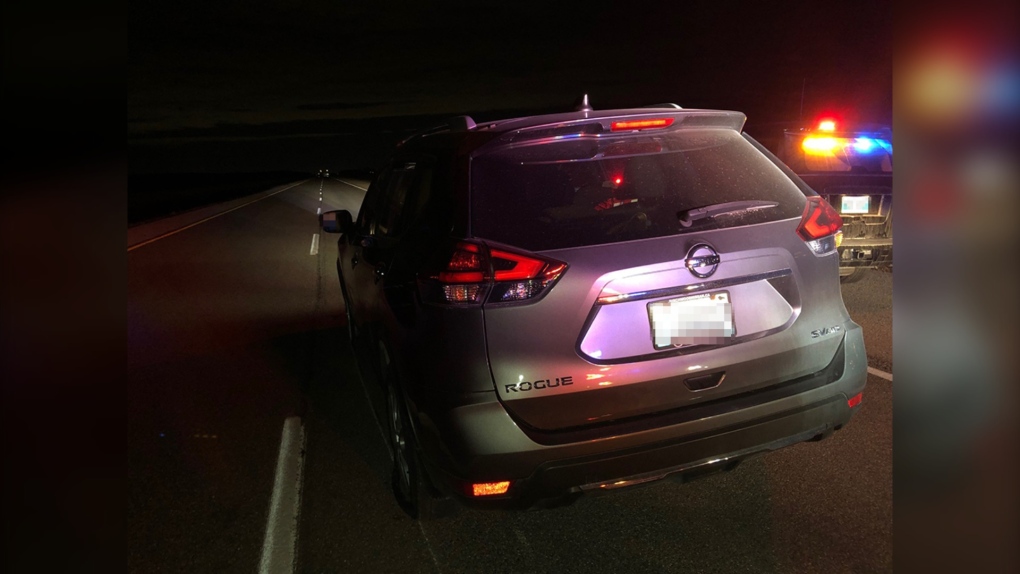 The vehicle that was stolen in Selkirk following a carjacking on Saturday, Sept. 25, 2021. (Source: Selkirk RCMP)
WINNIPEG -

On Sept. 25, at around 12:40 a.m., RCMP received a report about a carjacking that happened on Highway 59 just south of Ocean Drive in the R.M. of St. Clements.

Investigators learned that an SUV that had red and blue lights stopped a vehicle with two women inside. Police said a man got out of the SUV and asked the women for their identification and registration.

The women questioned the man and at that point, RCMP said he pulled a weapon on them, forcing them to get out of their vehicle and he took their phones.

Police said he travelled south on Highway 59 and was not wearing a police uniform.

RCMP were able to find the vehicle on Highway 59 near Highway 44 at which point police said the suspect tried to ram the police vehicle.

A spike belt was used to stop the car and officers arrested 40-year-old Ryan Demchuk of Winnipeg.

When he was taken to the RCMP detachment, police said he assaulted an officer and a guard. He has been charged with robbery with a firearm, assaulting a police officer, dangerous operation of a motor vehicle, possessing stolen property over $5,000, assault with a weapon, fleeing from police, impersonating a police officer, disguise with intent, and three counts of possessing a firearm while prohibited.

After he was arrested, police were looking for the other vehicle that was used in the carjacking.

Around 4:50 a.m., police found an SUV travelling north on Main Street in Selkirk. Both the driver and the passenger were arrested.

The driver was found to have a hidden knife on him. When police searched the vehicle, they found drugs, illegal cigarettes, and several weapons, which included an airsoft gun that looked like a handgun. Police also found a blue and red light.

None of the charges against the pair have been proven in court.

RCMP said all three people are in custody and an investigation is continuing.