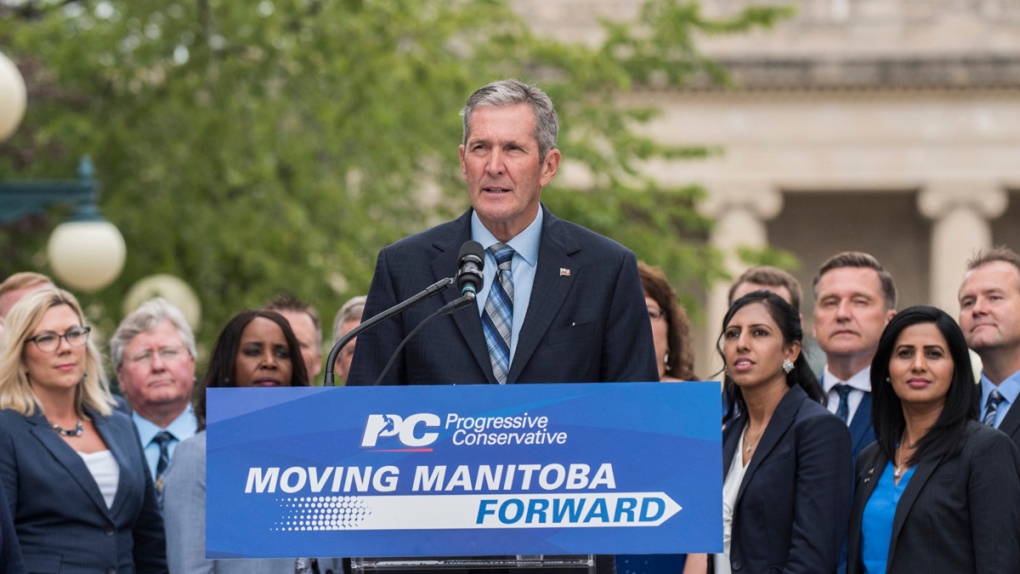 Progressive Conservative party leader Brian Pallister announces that the provincial election is underway after a visit to the Lieutenant Governor on Monday, August 12, 2019 in Winnipeg. (Photo: The Canadian Press)

WINNIPEG -- A rubber chicken has appeared on the campaign trail for the Sept. 10 Manitoba election as some opponents of Progressive Conservative Leader Brian Pallister accuse him of being afraid of debates.

Green party Leader James Beddome placed the toy chicken in front of an empty chair Tuesday night at a forum, held by anti-poverty groups, to which Pallister and other party leaders had been invited.

Beddome and NDP Leader Wab Kinew attended. The Liberals sent a candidate instead of their leader and the Tories sent no one.

"I think it was really unfortunate and it hurts the debate," Beddome said Wednesday.

"It says something about their interest in these issues."

The chicken is somewhat recycled, Beddome pointed out. A federal Green party candidate used it during the 2015 election when a Conservative did not attend a debate in the riding of Winnipeg South Centre.

Pallister said he is attending some debates and is participating in electronic town-hall meetings. His candidates are focusing on knocking on doors and meeting voters one on one. Pallister also said he's not interested in going to some debates.

"You all know the debate was organized by people antagonistic to the P.C. government, so we'll leave that there."

The Hunger and Poverty Forum was organized by several groups, including a food bank association, anti-poverty activists and the Canadian Centre for Policy Alternatives think tank. Its board members include representatives of unions that are also active within the provincial NDP.

One of the debate's organizers, an anti-poverty activist, was a student union leader when he appeared with former NDP premier Greg Selinger during the 2016 provincial election.

Kinew said Pallister should have attended to discuss ways to reduce poverty.

"If other leaders don't think that that's a priority ... then I hope Manitobans keep that in mind when you decide how you're going to vote," the NDP leader said.

One political analyst said the aversion to some debates is a sign that the PCs want to run a low-risk, low-key campaign. Opinion polls this year have consistently placed the Tories in the lead over the New Democrats and Liberals.

"I think the party worries about some candidates who may make loose remarks that get the party into trouble," said Paul Thomas, professor emeritus of political studies at the University of Manitoba.

"It's a short campaign. It's a low-profile campaign. You're ahead in the polls. Just minimize the risks ... and you'll at least reinforce the likely prospect that you're back in power again."

Tory promises in the second week of the four-week campaign have been relatively low key. Pallister on Wednesday promised a boost to existing tourism promotion programs. That came a day after promising an incremental increase to tax subsidies for film and video productions shot in Manitoba.

The government currently dedicates four per cent of provincial revenues from tourism to promote the industry through Travel Manitoba, a Crown corporation. Pallister said he would increase that to five per cent if elected to a second term.

The NDP promised Wednesday to spend $6.6 billion on strategic infrastructure over four years if the party were to win. That would be $690 million more than the Tories are planning, the New Democrats said.

"It's an investment in jobs and economic growth ... which are solely needed in Manitoba right now, more than ever," Kinew said.

The Liberals, who had four seats in the legislature when the election was called, had no announcements Wednesday and were still working to fill their slate of candidates before Monday's deadline.

Their latest nomination was Charles Huband, who led the party in the mid-1970s, later became a judge and is now retired in his 80s.