NEAR GARDENTON, MAN. -- A man out for a hike in southeast Manitoba Monday afternoon got his foot stuck in a beaver trap in an area where Manitoba Conservation and Climate had issued a wild animal kill permit for problem beavers.

The province said the traps were well marked and not near trails but the man said they weren’t marked well enough and were put too close to an area often used by people.

It happened near Gardenton, Man, which is about an hour and a half drive southeast of Winnipeg.

The man, who asked not to be identified, said he was visiting the Prairie Shore Interpretive Trail in the Tall Grass Prairie Preserve, which offers nature enthusiasts a chance to scope out plants, insects and watch birds.

He said he was walking on a path along a stream that wasn’t on the trail when he stepped in the trap which he said blended in with its surroundings.

“It was really tight,” he told CTV News late Tuesday afternoon. “I was able to kind of calm myself down.”

The hiker said he grabbed one end of the trap to relieve pressure on his foot. His next step was to remove a chain around a post that had the trap secured in place.

“Eventually, I looked at the chain that was hooked up to the post and there was like a wire wrapped throughout the chain and then twisted around the post,” he said. “My first real victory was when I unhooked the chain from the post.”

The man said he doesn’t think his foot is broken. While it was painful, he said he’s doing okay.

Paramedics and another man out for a hike eventually came to his rescue.

Greg Ritchie was planning to hike the trail with his dog but abandoned his adventure after helping the man.

When Ritchie got to the trailhead at around 2:30, he said the hiker was flagging him down, and when Ritchie went to help him, he saw the trap stuck on the hiker's foot.

“‘Holy crap you’ve got a conibear (trap) on your foot,’” said Ritchie, referring to the name of the trap. 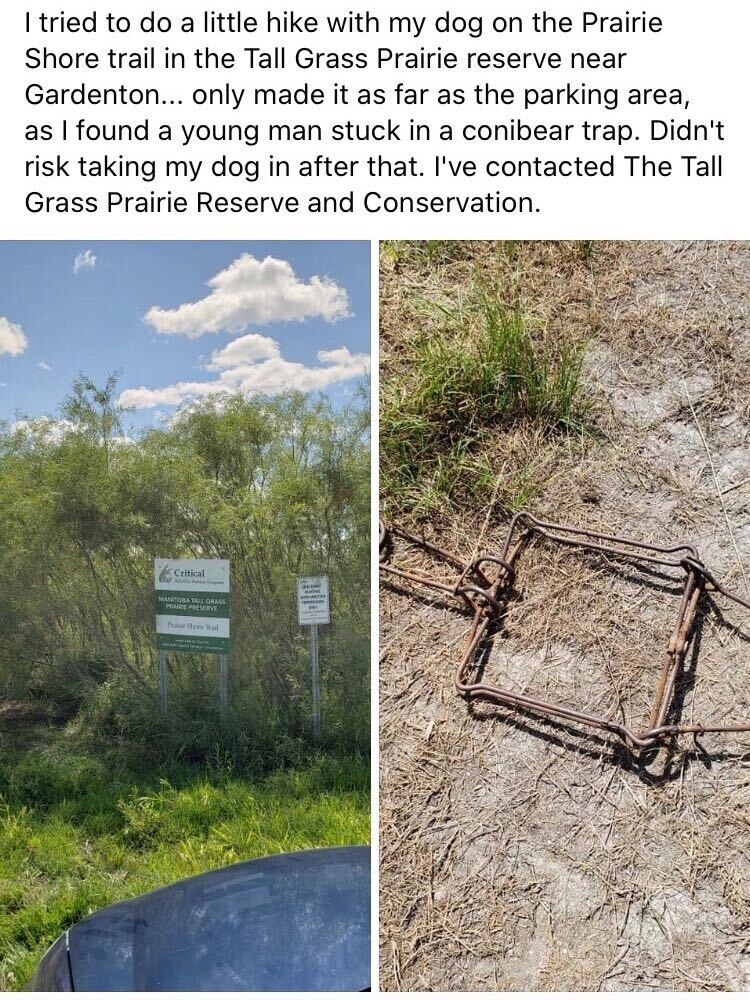 Ritchie said the hiker was alone and on the phone with 911 in the parking lot when he arrived.

Ritchie said the hiker had the trap stuck on his foot for about 45 minutes before he got there.

Ritchie, who’s worked with the traps in the past, helped the man get it off his foot before paramedics arrived.

“He was pretty relieved,” said Ritchie.

The Rural Municipality of Stuartburn said it recently got a complaint about beaver activity in the area with the caller raising concerns about clogged culverts along provincial road 209, which runs along the entrance to the trailhead.

The R.M. said it directed the caller to contact Manitoba Infrastructure because the road falls under the province’s jurisdiction.

In a statement to CTV News, Manitoba Conservation and Climate said a wild animal kill permit was issued for problem beavers in the area. It said all traps were marked and none were located on or near the trail.

But, the man trapped told CTV News the only marking he saw was orange flagging tape on a tree, and that he didn’t see it until after he’d stepped in the trap.

He feels the trap was located too close to an area used by hikers.

The owners and managers of the land the trail is on said they weren’t made aware of any trapping in the area.

“MHHC (Manitoba Habitat Heritage Corporation) has not provided permission for anyone to trap on that property, nor have there been enquiries to MHHC for permission to set traps,” said MHHC executive director Tim Sopuck in an email to CTV. “We are very sorry to have heard that someone was injured while they were out enjoying the property”

As for Ritchie, he decided not to hike the trail out of an abundance of caution because he was with his dog and was worried there might be more traps.