Vodka to hand sanitizer: how distilleries are fighting the outbreak

WINNIPEG -- As hand sanitizer continues to be an in-demand product due to the COVID-19 pandemic, other businesses are stepping up to help create the scarce commodity.

Health Canada is waiving some rules to help increase supplies and with that, it is allowing distilleries to pitch in to help.

Two distilleries in Winnipeg, Patent 5 and Capital K, are stepping up to create more hand sanitizer.

Brock Coutts with Patent 5, said they are doing this because there is a huge need for the product.

“We’re actually taking the base spirit, that usually becomes vodka and we are turning that base spirit into hand sanitizer,” said Coutts.

He added the process starts with 95 per cent ethanol. After getting the ethanol, it is brought down to 80 per cent alcohol, by volume, and mixed with glycerin and water.

The result is hand sanitizer.

He said they floated the idea out to several agencies and they received a strong response, so they halted gin and vodka production and started making hand sanitizer.

Coutts said they won’t be making money off the product.

“This is not for retail at all,” he said. “Everything that we make right now is going into the hands of agencies that serve people that might be vulnerable in the downtown area.”

Scott Kinnear with Capital K said they had the ability to help out so they decided to start making hand sanitizer.

He said most of what is made will be going to government agencies and some will be sold to the public but only at a price to help cover production.

“We feel it is important to support the community. This is not an opportunity to make a bunch of money, this is something we want to be part of the community with,” said Kinnear.

He added that working with government agencies has been extremely easy and they have been very accommodating for Capital K.

Both Kinnear and Coutts said they are trying to create as much product as they can, depending on demand. 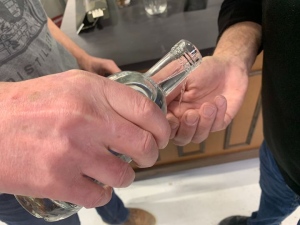