'We all want that land left as is': St. Norbert residents opposed to new development 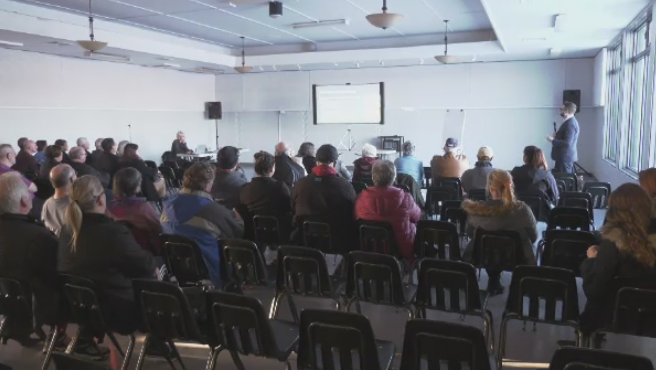 WINNIPEG -- Dozens of St. Norbert residents filled the St. Norbert Community Centre on Thursday evening to discuss the potential development of a piece of land in the area.

The more than 20 acre site sits north of Lemay Avenue between the Behavioral Health Foundation and Laureate Academy.

Paul Thorimbert, a 60-year resident of St. Norbert, was one of several attendees in opposition of the project. He said he doesn’t want to see anything developed on the land.

“There’s no exception to this. We all want that land left as is to nature.”

He said he worries about what will become of the eagles, owls, and deer that live in a forest in the area being proposed for development.

“You can sit in your back yard and you see all of this happening day after day,” said Thorimbert referring to the wildlife. “And they want to put high rises up in there? It’s a shame.”

“We have these sites that the city doesn’t own. It’s on the private market, (and) the city hasn’t picked it up as a park,” said Toews. “So what do we do with these major sites? We have to propose something.”

Toews said proposals for new communities and new developments are challenging. The meetings are designed to give residents an idea of what could be.

“We tell people we’re not here to sell a proposal,” he said. “I think if we all put our minds together to figure out what it could be, there would be benefits for the community too.”

Many residents at the meeting expressed concern that the new development will affect their quality of life.

Thorimbert would like to see the city get involved.

“(The city has) actually had meetings to buy this property in the past,” said Thorimbert. “I hope they see, and do the right thing, and buy the property.”

Landmark Planning said it’ll be at least three months before something is propose for the site. After that, it will submit an application to the city and wait for a public hearing.