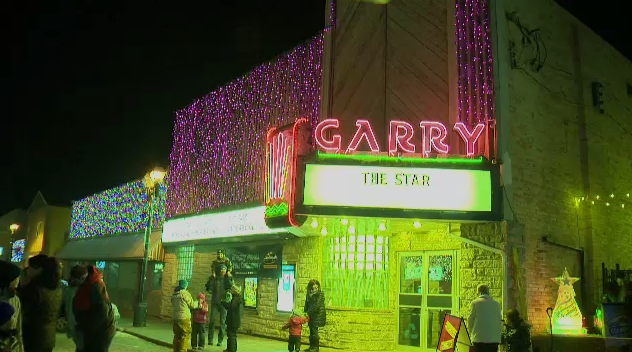 The Garry Theatre is pictured during Selkirk's Holiday Alley in 2019. It originally opened back in 1948, changing hands several times over the decades. (File Image)

The City of Selkirk has purchased the Garry Theatre, an iconic downtown building that has served as a single-screen movie theatre in the community for decades.

According to a news release, the city bought the building for $350,000 plus net closing costs.

The Garry originally opened back in 1948, changing hands several times over the decades.

The building was put up for sale most recently in May by its then-owner Landmark Cinemas. Management cited the combination of movie distribution issues, limited screenings and the pandemic as the final straw for the theatre’s demise.

READ MORE: Selkirk’s only theatre closes its doors after 73 years

Selkirk Mayor Larry Johannson said the decision to buy the theatre was an easy one.

“We knew this was going to come for sale on the market. We didn’t want to let this go,” Johannson told CTV News.

“We put a lot into our Manitoba Avenue East. We’re strong believers in building downtown, in having a downtown that’s vibrant.”

Johannson said like many in the community, he has countless memories at the Garry, from going as a kid to taking dates there to taking his kids, and now grandkids.

“I remember as a little guy going with my parents to the movies. My dad was a big James Bond fan and whenever a James Bond movie came out, whether we wanted to see it or not, we were piling into the car and seeing James Bond,” he recalled.

Now, the city is turning to the community to help write the script for the Garry’s future.

City of Selkirk chief administrative officer Duane Nicol said the city has no intention of operating the venue directly, but believes the community will offer up creative pitches on the space’s next act.

“When you have people with the right social bonds within a community you get groups coming together and creating wonderful things,” Nicol said in a news release.

“Ultimately there's a need for this body to bring people together, to have those discussions and to find resources. There are lots of federal and provincial arts and culture grants that are available, and this committee will be able to coordinate and access some of those resources,” Nicol said.

The city will be organizing citizen engagement for the project in the near future, but in the meantime, citizens can share ideas via email at citizensupport@cityofselkirk.com.

“You never know where you’re going to get the next great idea and who’s going to give it to you,” he said.

Tensions were high in India's western Udaipur city Wednesday, a day after police arrested two Muslim men accused of slitting a Hindu tailor's throat in a brutal attack that highlights a dramatic escalation of communal violence in a country riven by deep religious polarization.