'We need to push them to do more': Winnipeg students to take part in global climate strike Friday 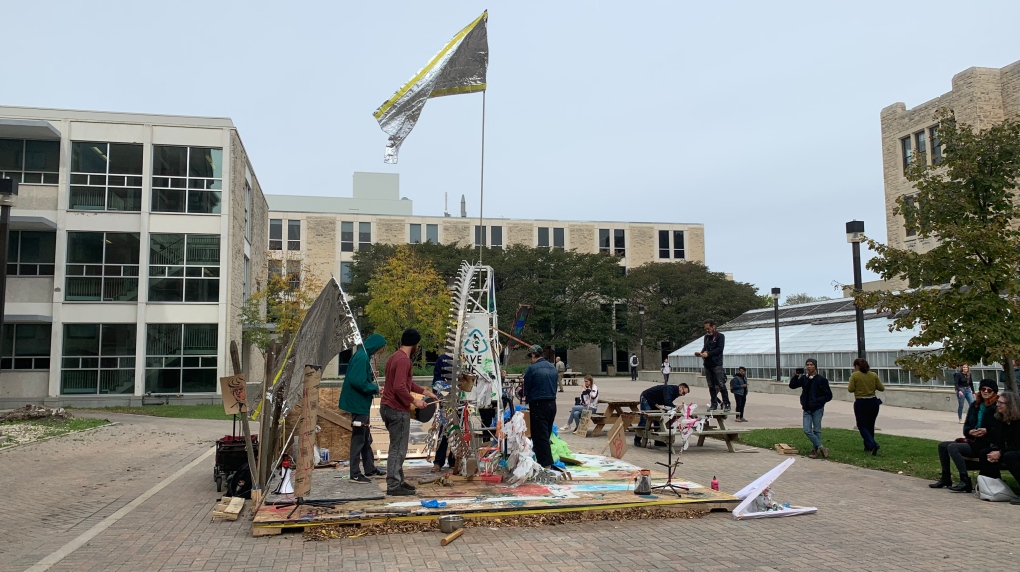 The eXperimental Improv Ensemble put on an outdoor performance on the U of M campus Thursday over the noon hour, to share the message collaboration is needed to fight climate change. (Josh Crabb/CTV News)

Students from schools and universities in Winnipeg are planning to take part Friday in a global climate strike.

A rally, march and massive art exhibition is planned on the grounds of the Manitoba Legislative Building.

The movement follows Swedish activist Greta Thunberg’s call for students to strike -- it’s expected many will walk out of schools or work to take part in the rally in order to show more needs to be done to tackle the climate change crisis.

The Winnipeg School Division said in a news release it endorses students’ involvement in the “life-changing and globally significant event.”

“This is a big part of our curriculum -- it’s woven throughout all different types of courses,” said Winnipeg School Division spokesperson Radean Carter, who noted the curriculum includes courses focusing on climate and sustainable development.

Classes to go on as planned

The city’s largest school division is asking parents to inform their child’s school if they plan to take part.

“We let our parents know a couple of weeks ago that this was happening,” said Carter. “If they approve their child attending the climate strike, that they would have to make sure that an excused absence was put in, so that we know the child is safe and has the parent’s permission to be at the event.”

Regular-scheduled classes will go ahead as planned.

“We think this is a great thing for students to be involved in, but we still have to follow our policies and make sure that our students are safe,” said Carter. “And there are also going to be students who don’t want to attend this, and we can’t force them and we wouldn’t to force them. And we have to make sure that classes are going on for them.”

Pembina Trails School Division said a few schools will be participating in Friday’s climate strike -- it said in a statement it’s leaving the decision to attend with school leaders.

“Transportation will be provided, for those that feel participating in the rally ties directly to curriculum and adds value to what is being taught in the classroom,” the division said in a statement.

David Thomas, a mechanical engineering student at University of Manitoba, said he’s getting involved because he feels governments and legislators aren’t making enough decisions based on science to counter climate change.

“I think we need to push them to do more of what we want them to or they’re not going to know.”

The eXperimental Improv Ensemble put on an outdoor performance on the U of M campus Thursday over the noon hour as part of a collaboration with students from the School of Art and Desautels Faculty of Music.

“The message is we all need to collaborate in order to combat climate change because it’s a very real thing,” said improv group member Nolan Hildebrand. “Everyone should be aware it’s happening and we need to work together to combat it.”