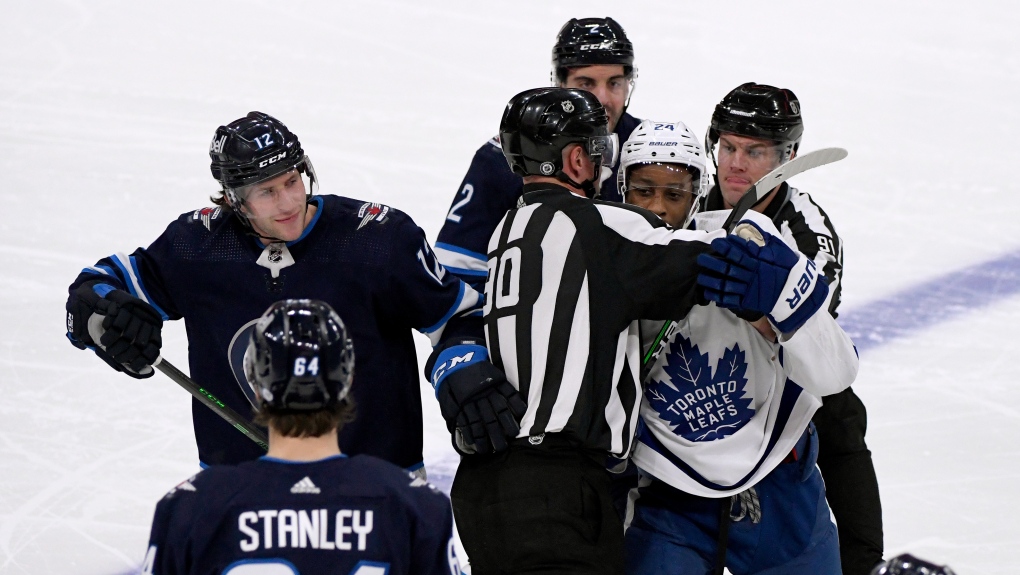 Toronto Maple Leafs' Wayne Simmonds (24) is held back by officials as he tries to get to Winnipeg Jets' Logan Stanley (64) during the third period of NHL action in Winnipeg on Sunday December 5, 2021. THE CANADIAN PRESS/Fred Greenslade
NEW YORK -

Winnipeg defenceman Neal Pionk was suspended two games on Monday for a knee-on-knee hit delivered to Toronto blueliner Rasmus Sandin in the third period of the Jets' 6-3 Jets' over the Leafs on Sunday.

Also Monday, Maple Leafs forward Wayne Simmonds was slapped with a fine for a cross-check he applied to Winnipeg Jets forward Jansen Harkins during the same game.

The NHL's department of player safety docked Simmonds $2,250, the maximum allowable under the league's collective bargaining agreement, for laying his stick into the back of Harkins during the third period of the Toronto road loss.

Meanwhile, Leafs centre Jason Spezza has been offered an in-person hearing with the league and will likely be suspended for kneeing Pionk in the head.

In-person hearings are required for any suspension that could be at least six games. The date and time of Spezza's hearing have not been announced.

This report by The Canadian Press was first published Dec. 6, 2021.

Afghanistan's capital was turned into a fortress to defend itself against the Taliban, but now it's Taliban fighters that are guarding the soaring concrete walls and layers of armoured barriers — all while a humanitarian crisis of hunger grows in the city.

Andre Leon Talley, the towering former creative director and editor at large of Vogue magazine, has died. He was 73.

U.S., allies pledge unity on Russia; to do what isn't as clear

U.S. President Joe Biden has rallied European allies to pledge as one that they will take tough measures against Russia if it rolls troops into Ukraine. But when it comes to what exactly the United States and Europe are willing to do, the allies don't look as ringingly united.