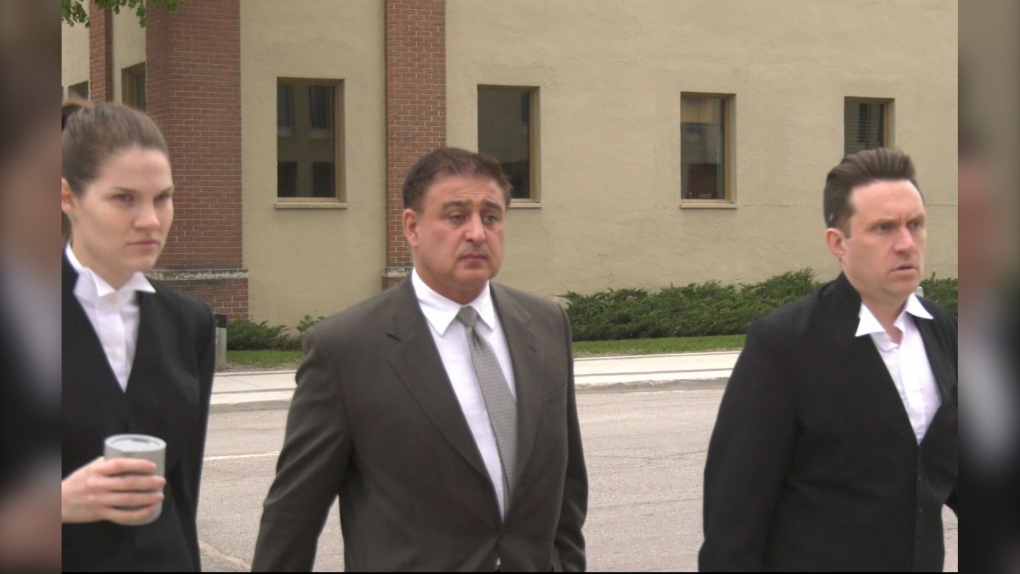 Manuel Ruiz (middle) leaves the law courts on May 29, 2020, during a break in his trial. (CTV News Photo Josh Crabb)

WINNIPEG -- WARNING: This story contains graphic details that may be disturbing to some readers.

A Winnipeg firefighter and martial arts instructor has been found not guilty of three charges involving one of two women who testified at his sexual assault trial, but no ruling has been made yet involving the charges stemming from allegations made by another woman.

Court heard Manuel Ruiz has been found not guilty of sexual assault, forcible confinement, and procuring someone to provide sexual services— charges stemming from allegations made by a 35-year-old woman.

The Crown asked the court for the not guilty finding before closing arguments in the case. Manitoba Court of Queen’s Bench Justice Joan McKelvey told the trial she accepts the Crown’s recommendation. McKelvey told the court she reviewed the evidence in great detail and determined the three charges have not been proven beyond a reasonable doubt.

Ruiz is still charged with six offences — three counts of uttering threats, two counts of sexual assault, and one count of forcible entry — in connection with allegations made by a now 46-year-old woman.

The woman testified she began talking on the phone with Ruiz when she was 14 and stayed in contact for several years. She told the court when she was in her twenties, he was at her apartment, put his hands down her underwear, and touched her.

In a separate incident, she testified Ruiz threw her on a futon and had sexual intercourse with her.

Ruiz has testified the woman initiated sex and it was consensual.

Ruiz, 56, has pleaded not guilty to the remaining charges. Closing arguments started Tuesday morning in his trial.

None of the remaining charges have been proven in court and Ruiz is presumed innocent.