Winnipeg Jets could be getting Byfuglien, Bogosian and Slater back Saturday 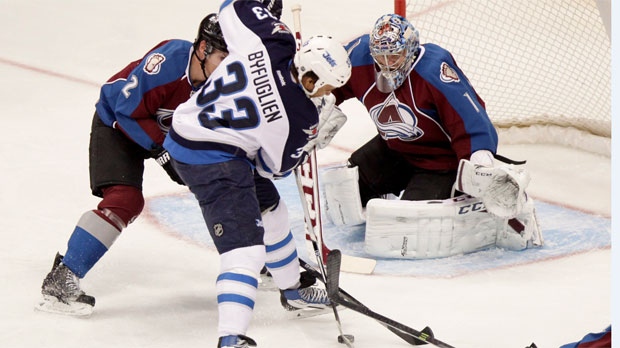 Winnipeg Jets' Dustin Byfuglien (33) makes a shot on goal, Colorado Avalanche goalie Semyon Varlamov (1), of Russia, makes the save during the first period of an NHL hockey game on Monday, March 10, 2014 in Denver. (AP Photo/Barry Gutierrez)

WINNIPEG - The Winnipeg Jets could be getting three key players back for Saturday's game against the Carolina Hurricanes.

Coach Paul Maurice says he expects forwards Dustin Byfuglien and Jim Slater and defenceman Zach Bogosian to skate in the morning and he's fairly optimistic they will be able to dress for the game.

All three missed Wednesday's game against the Colorado Avalanche, but the Jets still pulled a 5-4 overtime win out of the hat.

Slater skated Friday and is also a new father, as his appropriately-named daughter Win was born Wednesday.

Maurice says he'd be making decisions about who plays after the morning skate.

But the coach says goaltender Ondrej Pavelec isn't ready to return, although he may be able to play when the Jets face Dallas on Monday.