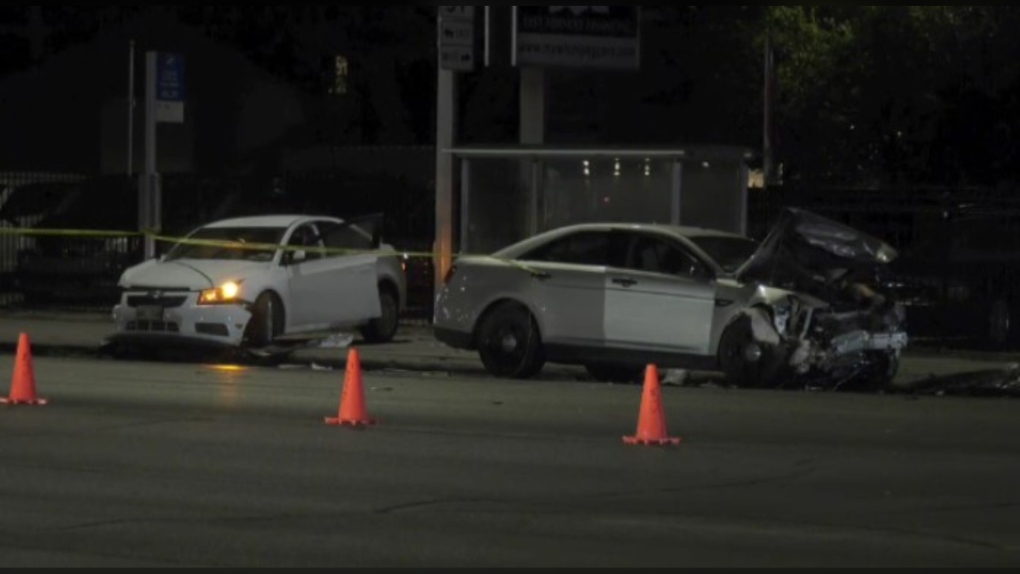 A crash occurred between an unmarked police car and a civilian vehicle on the evening of October 28, 2021, at the intersection of Main Street and College Avenue. (Source: CTV News Winnipeg)

A Winnipeg police officer has been charged with driving offences nearly five months after a crash in the North End involving an unmarked police cruiser sent three people to hospital.

On Wednesday, the Independent Investigation Unit of Manitoba (IIU) said there are reasonable grounds to believe there was an offence under the Criminal Code and the Highway Traffic Act in connection with the crash.

The IIU said Const. Bradley Louden has been issued a summons in provincial court for driving dangerously contrary to the Criminal Code, and misuse of emergency vehicle equipment contrary to the Highway Traffic Act.

The charges are in connection with a crash between an unmarked police car and a civilian vehicle that happened on the evening of October 28, 2021, at the intersection of Main Street and College Avenue.

The IIU said the crash left the driver of the civilian vehicle in hospital with fractured vertebrae. Two police officers were also taken to hospital, one of whom had a broken arm.

The IIU said as the matter is now before the courts, it will not comment further. The police officer is set to appear in court in May.

A gunman on a rooftop opened fire on an Independence Day parade in suburban Chicago on Monday, killing at least six people, wounding at least 30 and sending hundreds of marchers, parents with strollers and children on bicycles fleeing in terror, police said. The suspect remained on the loose hours later as authorities scoured the area.

The federal government says it has signed a $20-billion final settlement agreement to compensate First Nations children and families harmed by chronic underfunding of child welfare.

Canadian airlines and airports claimed top spots in flight delays over the July long weekend, notching more than nearly any other around the world.

'He was a hero': Family says Ottawa man killed in fatal collision sacrificed himself

The family of an Ottawa man killed in a Canada Day crash in the west end says Tom Bergeron died exactly as he lived: selflessly thinking of others before himself.