The large fibreglass sphere that sits in a Winnipeg front yard isn't a piece of lawn art but a space-age remnant of decades past.

The Manitoba government launched the Orbit program in 1965, which saw unique trashcans placed along the province's highways in an effort to reduce the amount of litter.

Broose Tulloch is the proud owner of an Orbit, which he displays in front of his house.

"I remember them as a kid in the 70s, everything was about space and with the Orbit, there is something so spacey about them and the attraction never left," said Tulloch.

Tulloch acquired the special trashcan from a friend in 2020.

"About 15 years ago, a local filmmaker, James Rewucki, he generally does horror films but has an acute interest in history, did a really spacey video on YouTube called Where Have all the Orbits Gone," recalled Tulloch. "I just happen to know him because he's a musician and I said, 'I'll be the guardian of this.'"

The Orbit holds a special place in Tulloch's heart.

"I absolutely love it on so many levels," he said.

"It's sort of a reminder of the romantic space race and it's become a real talking piece. You see people go by and say, 'what is that?' and you get to meet your neighbours that way and strangers.

Tulloch said he's seen many people discuss the Orbit and take photos of it, including a city road crew.

"There are work crews that come by that do the streets and what not, and the foreman goes, 'I'm just here explaining to the kids what this is."

The vintage Orbit is showing its age with a few minor cracks and chips but is still easily identifiable for nostalgic bystanders.

"At the time, we thought it was the last one, but it's come to light that there's at least three, maybe five more out of 85 that were decommissioned in the province," Tulloch said.

According to Tulloch, some surviving Orbits were turned into yard art several years ago. Tulloch's Orbit, however, will stay in its original form. 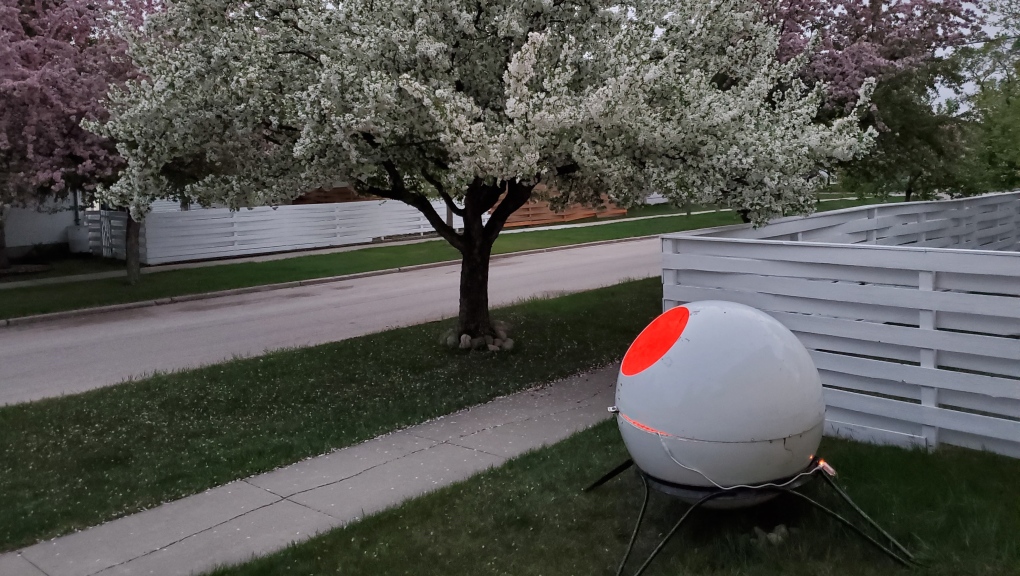 Tulloch's Orbit emits an eerie glow at night thanks to a set of red LED lights placed inside. (Source: Broose Tulloch)

Tulloch says he plans to paint the base, make a better surrounding and add a plaque to ensure the unique piece of Manitoba history can be enjoyed for years to come.

"People really need to be more interested in and more proud in what we have in our backyard," he said. "Your own story is important and everyone wants to hear your perspective."

-With files from CTV's Zach Kitchen

Germany's centre-left Social Democrats and outgoing Chancellor Angela Merkel 's centre-right bloc both laid claim Sunday to lead the country's next government, even as projections showed the long-time leader's party heading for its worst-ever result in a national election.

The Americans won back the Ryder Cup and perhaps a whole lot more Sunday, sending a strong message to Europe with a powerful performance from their youngest team in history.