A new push to bring more public washrooms to what's being called a 'toilet desert' in Winnipeg’s downtown area.

Bridgman said having accessible toilets is about more than helping the homeless, it's a human rights issue.

"I have to go pee. That's a shared thing that we have from childhood to old age," said Bridgman.

Saturday Bridgman invited Winnipeggers to stand up in solidarity, cross their legs, and pose in a picture to be used as part of a future awareness campaign.

He also asked people to share their stories of having to find a bathroom or help another person in a bind.

Grant Mitchell is a retired lawyer and avid runner living with ulcerative colitis.

"So the inclination or temptation is to stay home cause you’re close to a washroom and you're not going to be embarrassed, you're not going to have an accident,” said Mitchell who took part in the project. “Well staying home is not a healthy way to live your life.”

"People end up having their gardens used as public washrooms, which also is not pleasant and a health hazard," said Elaine Bishop who lives in North Point Douglas.

The City of Winnipeg says it researched public washrooms in the downtown area and found they're not feasible to construct and maintain. It also found potential concerns around costs and safety.

“Most modern cities have a number of public bathrooms people can use,” said Jino Distasio with the University of Winnipeg’s Institute of Urban Affairs.

Distasio said Winnipeg has fallen behind when it comes to public washrooms, and believes it's time the city have a few of them for people struggling, tourists, and locals out and about.

"I think a lot of those hiccups that we've seen before have been resolved by self-cleaning, self-opening, all kinds of technologies in place to create an important part of the daily function that people need to have access to," said Distasio.

In fact, Bridgman and the Downtown Biz are working to create pop-up toilets.

Bridgman said for public bathrooms to fully be a success an attendant is required.

He plans to take the cross-legged photographs and make them into a mural. Both the pop-up toilets and the mural are expected go up sometime next year.

Bridgman said he’s looking at four possible locations including, Henry Avenue and Main Street, outside Bell MTS Place, the Manitoba Legislative Building, and the north side of Portage Place. 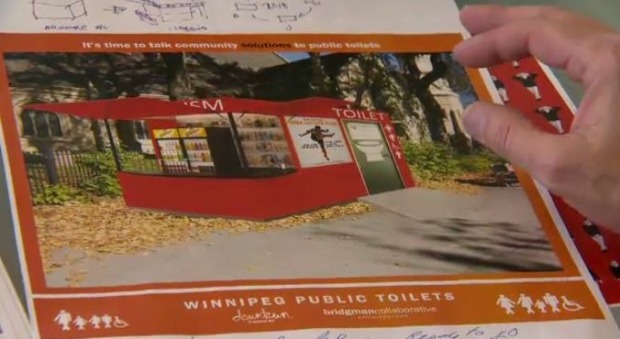