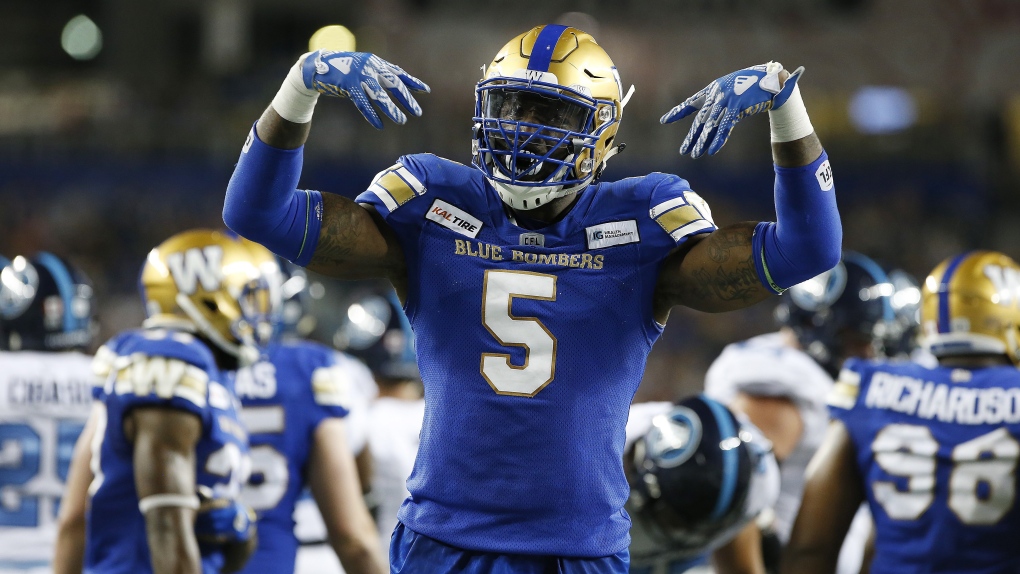 Winnipeg Blue Bombers' Willie Jefferson (5) celebrates stopping the Toronto Argonauts from touching down across the one yard line during second half CFL football action in Winnipeg, Friday, July 12, 2019. THE CANADIAN PRESS/John Woods

WINNIPEG -- The Winnipeg Blue Bombers continue their preparations for the upcoming season, signing two members of their defensive corps to contracts for 2021.

On Monday, the team announced they had signed Willie Jefferson, the CFL’s most recent winner for Defensive Player of the Year, to a restructured contract to play for the upcoming season. The team also signed defensive back Brandon Alexander to a one-year extension.

Jefferson will be entering his seventh season with the CFL, and his second with the Blue Bombers. During the 2019 season, Jefferson registered 12 quarterback sacks and set a new CFL record for pass knockdowns by a defensive lineman with 16. He also led the CFL with six forced fumbles, and recorded 24 tackles, an interception and two fumble recoveries.

During the 2019 Grey Cup, Jefferson made three sacks and two forced fumbles during the game.

Anderson, who shifted from defensive lineman to safety in the 2019 season, is entering his fourth season with the Bombers.

“There was no reason for me to think about going anywhere else,” Alexander said on Monday.

While he said he would play any position the team asks him to, Alexander said he does have a preference of position.

“I do like safety, only because I get to talk to everybody on the field, and I think that’s where my best asset lies, not just my play on the field, but to be able to make everybody else feel comfortable out there and just be themselves,” he said.

The Blue Bombers are scheduled to begin the 2021 season on June 10.